Steven Finn registered the second best figures for England against India in ODIs.

Pacer Steven Finn registered the second best figures for England against India in One-Day International (ODI) during the third match at The Gabba on Tuesday. The best fowling figures are by Ronni Irani, when he took five wickets at The Oval in 2002.

This is also the second time that two England bowlers have taken four wickets or more against India in ODIs.

This is also India’s lowest score against England in ODIs, when they have been bowled out.

India were bowled out for 153 by England bowlers, as Finn picked up five wickets and James Anderson picked up four wickets.

Stuart Binny was the top-scorer for India with his 44. MS Dhoni scored 34 and put up a partnership of 70 runs with Binny. 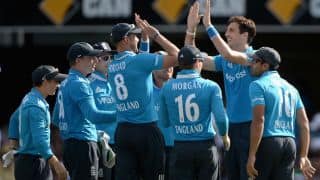 Steven Smith to lead Australia against England in tri-series