India will look to win the match easily and go to the final unbeaten in the group stages.

United Arab Emirates (UAE) have crawled their way to 81 for 9 in their 20 overs against India in the Asia Cup T20 2016 match against India. The bowlers were clinical in their approach and India were on top right from the beginning and never let UAE gain control at any point of time. Bhuvneshwar Kumar started things off really well. His first over was a maiden, but the second over turned out to be a wicket maiden as he got rid of Swapnil Patil. Jasprit Bumrah partnered Bhuvneshwar really well and he too picked up a wicket soon, dismissing Mohammad Shahzad for a duck. Live Cricket Scorecard: India vs UAE, Asia Cup T20 2016 Match 9 at Dhaka

India kept up the pressure and soon they picked up the wicket of Rohan Mustafa for 11. Shaiman Anwar was the only one to put up some fight for India, but he soon ran out of partners. Anwar was eventually run out in the last over for 43.  Pawan Negi came onto bowl his first over in international cricket in the 13th over. Despite conceding 10 overs off it, he managed to pick up the wicket of Muhammad Usman. Harbhajan Singh, Hardik Pandya and Yuvraj Singh too were among the wickets. Live Blog: India vs UAE, Asia Cup T20 2016 Match 9 at Dhaka

The highlight of the match was perhaps the catch by Pandya to dismiss Muhammad Kaleem. Pandya ran in quickly from the deep, dove forward and completed a superb catch. UAE however managed to show some intent in the last couple of overs, but India were too good and restricted their opponents for a score well short than 100. 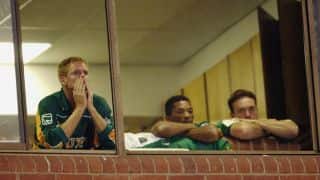 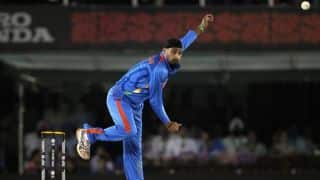