An injured Kedar Jadhav helped India register a narrow three-wicket win over Bangladesh in the final to lift the 2018 Asia Cup.

Runners-up in 2012, 2016 and now 2018, Bangladesh will not be third time lucky. An injured Kedar Jadhav dragged the lower order to a tense last-ball finish, helping India register a narrow three-wicket win over Bangladesh in the final to lift the 2018 Asia Cup. Jadhav, forced to retire hurt in the 39th over, came back to bat in the 48th at the fall of Ravindra Jadeja‘s wicket, to see India through in a thriller.

Bangladesh, defending a modest total of 223, put up a fight for the ages by strangling India’s middle order. But soon the scenario changed, and this game seemed to have all the makings of a repeat of the Nidahas Trophy final. Back then, India needed five off the last ball. Here, the equation was six needed in six.

Mashrafe Mortaza threw the ball to Soumya Sarkar, the same bowler who bowled the last over to Dinesh Karthik back in March, but just when he reached the bowling mark, the skipper changed his mind, and handed Mahmudullah the responsibility. After knocking the first two balls for singles, Kuldeep Yadav slog swept and scampered for two. The next two were a dot and a single, putting Jadhav back on strike. With one needed off the final ball, Mahmudullah fired it onto Jadhav’s pads, which resulted in a leg-bye for a boundary. Victory was India’s, bringing them their seventh Asia Cup crown.

India’s chase began emphatically. Rohit Sharma and Shikhar Dhawan, easily the best opening pair of the tournament, scored at over seven an over in the first four before the left-hander chipped down to Nazmul Islam and found Sarkar at mid-off. A tentative Ambati Rayudu struggled for six balls before edging to Mushfiqur. Rohit, however, kept the scoreboard moving. He hoicked Nazmul over deep midwicket and pulled Mustafizur Rahman over the square leg boundary.

Bangladesh applied pressure through Rubel Hossain, who tied Rohit down by targeting the stumps. The rest of the bowlers picked up from him and prevented the Indian captain from freeing his arms. The pressure paid off and Rohit went for another pull but found the fielder running in from deep square leg. Three down for 83, Karthik and MS Dhoni were key. Karthik began impatiently, while Dhoni was slow to get off, scoring just six off his first 22 balls. A cover drive for four broke the shackles, and the former India captain hit three more to steady the innings. The two brought up a much-needed 50-run stand.

India needed the two to carry on. But on came Mahmudullah, darting one on middle stump; a full toss that Karthik missed to be given out leg before wicket. Jadhav struck a six to signal his arrival but soon suffered a relapse of the hamstring injury that kept him out of action for almost six months. Struggling to rotate strike, he had to retire hurt. The big blow arrived when Dhoni edged Mustafizur and walked off to stunned silence. India were effectively six down for 167 and Bangladesh were on top.

A resolute 52-run stand between Jadeja and Bhuvneshwar brought India back. Arguably, the shot of the night came from the bat off Bhuvneshwar, when he launched the most economical bowler, Rubel, beyond long-off. India seemed to be gaining the advantage, but Bangladesh wrested it back by removing both batsmen in quick succession, before Jadhav’s heroics came to the fore and bailed India out of trouble.

Bangladesh would have loved to put up more runs on the board. And it looked almost certain considering the start they had. Opener Liton Das took 87 deliveries to complete his maiden century and helped Bangladesh to a flying start; to an extent that their 100 was up inside 18 overs. However, once India made the breakthrough, Bangladesh lost steam and lost wickets in a flurry with Kuldeep picking up 3/45.

India were blindsided by the assault that their pacers Bhuvneshwar and Jasprit Bumrah came in for. Liton dictated terms and scored an over six an over, taking Yuzvendra Chahal for 17 runs, including two sixes in the eighth. 41 off Bangladesh’s first 58 runs belonged to Liton, who went on to hammer 12 boundaries and two sixes.

It took India 21 overs and the golden arm of Jadhav to snap Bangladesh’s 120-run opening stand. And another 12 to send back the next four batsmen. Mehidy Hasan, Liton’s new opening partner, slapped a short one from Jadhav to find Rayudu at cover, which triggered the slide. Bangladesh’s stars from the previous game Mushfiqur Rahim connected the bottom of his bat before holing out to Bumrah in the deep and Mohammad Mithun was run out.

Mahmudullah became Kuldeep’s first wicket before Liton and Sarkar tried to resist. From 102 for no loss in 18 overs, Bangladesh laboured their way to 165/5 at the end of 37th. Liton tried to get a move on with a six off Jadhav and attempted to rattle Kuldeep by stepping down to him and drilling him over his head. But Kuldeep was able to get his revenge, foxing the batsman with a googly as Dhoni affected his first stumping of the match. His second stumping of Mortaza was also his 800th dismissal in international cricket. 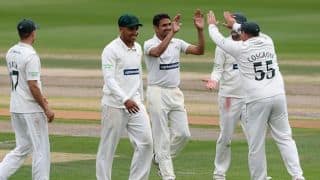 Mohammad Abbas to return to Leicestershire in 2019 Aisa Cup 2018: Made a lot of mistakes in the field: Mashrafe Mortaza