Indian cricket selectors Vikram Rathour and Saba Karim kept a close watch on the side's preparations for the dead rubber against Pakistan at the Feroze Shah Kotla here Sunday. 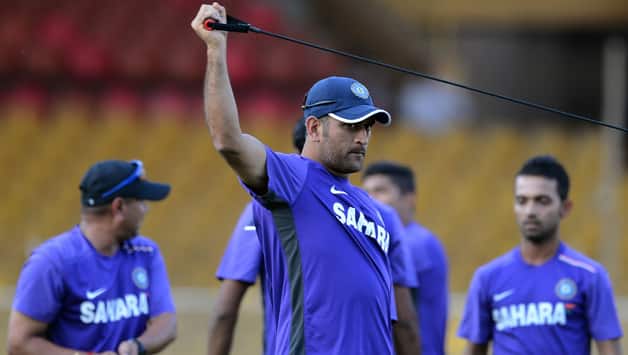 Indian cricket selectors Vikram Rathour and Saba Karim kept a close watch on the side’s preparations for the dead rubber against Pakistan at the Feroze Shah Kotla here Sunday.

Rathour and Saba had a long chat with India captain Mahendra Singh Dhoni, who is under pressure following the team’s dismal performance since the 2011 tour of England.

The two selectors also had a one-on-one with out-of-form Virender Sehwag Saturday.

The Delhi dasher scored 31, 4, 34, 3 and 15 in his last five ODIs and failed to shoulder the responsibilities when it was expected in the absence of seniors like Sachin Tendulkar.

Sehwag and his opening partner Gautam Gambhir were the first to take the nets and spent around 20-30 minutes.

Yuvraj Singh, however, for reasons unknown skipped the practice session.

Dhoni has said that the form of the top-three has been a cause of concern for the team.

The spotlight will be on Sehwag, Gambhir, Yuvraj and Suresh Raina to perform or perish at the Ferozeshah Kotla as selectors will announce the team for the five-math England series Sunday night after the third ODI against Pakistan.

Pakistan have already clinched the ODI series 2-0 while the two-match Twenty20 ended in a draw.