West Indies captain Jason Holder led from the front with a five-wicket haul. India, who dominated the game for most part, were undone by a combination of disciplined West Indies bowling and their own inexplicable lethargy at the crease.

With 17 needed from 16 balls and MS Dhoni and Ravindra Jadeja out there in the middle, you would back Team India to win 9 out of 10 times. However, Sunday was that rare occasion when the team floundered and failed to win from that position. West Indies beat India by 11 runs in the fourth fixture of the five-match One-Day International (ODI) series at the Sir Vivian Richards Stadium in Antigua to keep the series alive. Though India still lead the series 2-1, West Indies are in with a great chance to square the series with a victory in the final ODI at Kingston, Jamaica on July 6. Live cricket scorecard: India vs West Indies, 4th ODI

West Indies captain Jason Holder led from the front with a five-wicket haul. India came into the match to maintain their unbeaten run in this short campaign. But the visitors were undone by a combination of disciplined West Indies bowling and their own inexplicable lethargy at the crease. That pedestrian progress was typified by Dhoni’s painstaking innings of 54 off 114 deliveries — the slowest of his 64 ODI half-centuries — before he fell off the last ball of the 49th over bowled by Kesrick Williams. That left India needing 15 runs off the final over with only two wickets in hand.

It was Williams’ only success of a miserly 10-over spell but proved critical as Holder sealed the win. He dismissed Umesh Yadav and Mohammed Shami in the space of four balls to finish with 5 for 27, his best-ever ODI figures as India folded for 178.

Ajinkya Rahane‘s excellent form at the top of the order continued with a top score of 60, but the rest of the Indian batting struggled to establish any sort of momentum as the West Indies showed discipline and purpose with the ball. Young fast bowler Alzarri Joseph, brought into the team in place of medium-pacer Miguel Cummins, set the tone for the fight-back with the wickets of Shikhar Dhawan and Dinesh Karthik. Meanwhile, Holder removed his Indian counterpart, Virat Kohli, for the second time in as many matches via a top-edged hook.

Apart from Rahane and Dhoni, none of the top-order batsmen showed determination to stay at the wicket. Pandya scored a quick 20 lower down the order, but was cleaned up by Holder.

Earlier, Holder won the toss and elected to bat first. He made a solitary change, bringing in Joseph for Cummins while India made three, with Karthik, Shami and Jadeja replacing Yuvraj Singh, Bhuvneshwar Kumar and Ravichandran Ashwin respectively. Rishabh Pant continued to warm the bench.

Another poor show with the bat saw West Indies ending at 189 for 9. The hosts did get off to a good start courtesy their openers Evin Lewis and Kyle Hope, both of whom scored 35 and added 57 for the first wicket. But once India found the first breakthrough, their bowlers continued making inroads at regular intervals to restrict West Indies to a modest total. Hardik Pandya and Umesh Yadav were the pick of the bowlers, taking three wickets apiece. Kuldeep Yadav continued to impress with his two wickets, taking the series tally to 8 wickets from 3 games.

The top-five West Indies batsmen got starts, only to throw them away. Indian bowlers kept things tight from the onset and were exceptional at the back end of the innings on a two-paced surface. Such was their dominance that West Indies batsmen could not score a single boundary off the last 83 balls. 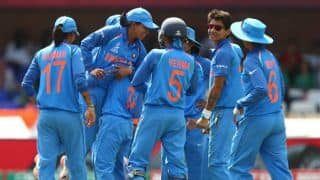 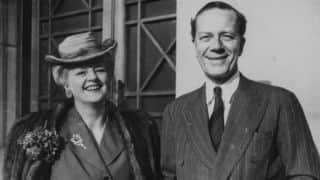