India paid the price for leaving too much for the end as their triangular series match against Sri Lanka ended in a nerve-wrecking tie today despite captain Mahendra Singh Dhoni's last-ditch charge to overhaul the target. 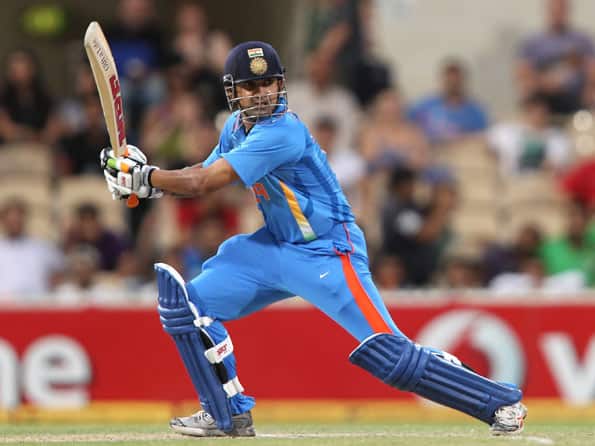 India paid the price for leaving too much for the end as their triangular series match against Sri Lanka ended in a nerve-wrecking tie today despite captain Mahendra Singh Dhoni’s last-ditch charge to overhaul the target.

India did well to restrict Sri Lanka to 236 for nine but their tense run chase got difficult with the pitch getting a little slower at the end and they were stopped at the same score in a match that saw fortunes fluctuating from one team to the other till the very end.

Gautam Gambhir (91) and Dhoni (58 not out) were the top performers for India, while Sachin Tendulkar (15), Rohit Sharma (15) and Virat Kohli (15) got the starts but couldn’t turn them into big scores.

Needing nine runs off the final over bowled by Lasith Malinga, India managed two runs off the first, two singles off the next two before Dhoni survived a run-out chance.

However, Vinay Kumar was run-out off the fifth ball and it boiled down to four required from the final delivery.

Dhoni lobbed the final delivery towards extra cover and it was headed for a four which Upul Tharanga pulled back from the ropes. It still was three runs for the Indian captain and an exciting tie in the match.

Earlier, for the second game in running, Gambhir missed out on a century but played substantially enough to ensure India got something out of both matches.

On Sunday, India beat Australia by four wickets to gain full four points and two from the game now takes them top of the heap with 10 points in the kitty from four matches. Australia has nine points from three matches while Sri Lanka has two from three games.

Gambhir and Dhoni came together at a critical time when India were 118 for four in the 28th over and another wicket could have really put the skates under their feet. But they batted with the calm they are known for and didn’t allow the scoring to drop too as 50 between the two came off 58 balls.

However, disaster struck in the 41st over when Dhoni pushed Malinga to mid-on and took off only to pull his steps back. Gambhir by then was down the track a fair distance and Kulasekara with his throw was right on the mark.

Gambhir made his 91 off 106 balls with six fours and for the second match in running, he was denied a century.

The pressure now built on India and they became six for 184 in the 44th over when Ravinder Jadeja (3) lofted a catch into the covers, leaving India to score 46 runs off the final five overs.

The 46th over turned out to be a big one for India as Dhoni slammed Thisara Perera for a six and Ashwin drove him over extra cover for a four. In all 13 runs came from this over and the equation came down to 33 from the final four overs.

The 47th over, bowled by Kulasekara, produced five runs and India’s equation was now down to 28 from the final three overs.

Malinga bowled the 48th over and it was as dramatic as it gets. Ravi Ashwin lofted a high catch but Sangakkara couldn’t latch on to it. Two deliveries later, Ashwin still lobbed a catch at short covers. India needed 24 runs from the final two overs.

The 49th over, bowled by Angelo Matthews, was a bonanza for India. Irfan Pathan hit a six off no-ball but then was run-out off the free hit. It helped India that Dhoni also hit a four off the penultimate delivery to make the calculation nine from the final over.

In the last over, India could only manage eight runs with the loss of another wicket as the match ended in a draw.

Earlier, India began reasonably assured with Tendulkar striking two leg-side fours in his 15 before he chased an outswinger from Nuwan Kulasekara and edged a catch behind the stumps.

Virat Kohli (15) looked good too during his short stay before he failed in his attempt to flick Thisara Perera and was ruled out leg before wicket in the 15th over.

It was then the turn of Rohit Sharma to leave the centre in the 22nd over, brilliantly run-out by Mahela Jayawardene who picked a shot from Gambhir on the run and broke the non-striker’s stumps with the right-hander inches short of his crease.

India slipped further in the hole when Raina (8) tried to flick Malinga and only to edged it for Sangakkara to take a brilliant diving catch on the legside.

India had a lucky reprieve when Perera dropped Dhoni off his own bowling in the 31st over with the Indian skipper scoring only 10 then.

Gambhir batted in his trademark style, dropping anchor at one end and looking to rotate the strike at all times. He picked gaps at will and was a busy presence in the middle. He reached his half century with one such nudge, needing 62 balls and hitting four fours.

Earlier, Sri Lanka wasted a good mooring to be 236 for nine from their allotted 50 overs.

The Lankans, cruising at 168 for 3 in the 35th over, completely lost the plot by losing wickets in a clutch and raising a rather inadequate total against a powerful Indian line-up.

Medium-pacer Vinay Kumar (3 for 46) and Ravi Ashwin (2 for 30) were most impressive though Irfan Pathan (1 for 38), in his first match of the series, looked the part as well.

Young Dinesh Chandimal (81 off 91 balls) had perfectly anchored the innings and shared important stands of 51 and 94 runs with batting heavyweights Kumar Sangakkara (31) and Jayawardene (43) before Lankans lost wickets against the run of play.

The batting powerplay, claimed in the 36th over, turned the game on its head as only 18 runs accrued from five overs and three wickets were lost.

Much hope was pinned on Matthews (17) to strike late blows but he departed in the 47th over, running for the non-striker’s hand when the ball had been nestling in the gloves of Dhoni.

Matthews was earlier guilty of running out Chandimal by calling him for a single after pushing straight into the hands of short-cover fielder.

Chandimal, till he was around, appeared Sri Lanka’s saviour who were stuttering with the loss of openers Upul Tharanga (0) and Tillakaratne Dilshan (16) at 28 for 2 in the eighth over.

Chandimal, who has a penchant for Indian bowling — his two previous innings against the major neighbours were worth 111 and 64 runs — was into his stride early and picked up gaps at will to quell the Indian attack.

The right-hander maneuvered the ball with deft hands and didn’t allow the departures of his batting partners to affect his style or concentration.

He came to the wicket when the innings was in terrible shape after the openers had left to catches by Mahendra Singh Dhoni, playing his 200th match, the bowling of Vinay Kumar and Irfan Pathan, who replaced Zaheer Khan in this match.

The sparse crowd had barely settled themselves in their seat when Upul Tharanga (0) left to a catch behind the wicket off Vinay Kumar. His partner Dilshan struggled to get his timing right and left to Pathan after making 16 off 23 balls with a four and a six.

Chandimal then stabilized the innings in company of Sangakkara, first by seeing off a disciplined Vinay and Pathan and later when the spin was introduced in the form of Ravi Ashwin in the 16th over.

Sangakkara had really laid the base for a long innings when uncharacteristically, he tried to heave Ashwin out of the ground and could only lift it for Gautam Gambhir at point.

Sangakkara made 31 off 56 balls with two fours.

The innings then had its best stand of 94 between Chandimal and skipper Jayawardene. The two were in no trouble at all and were nicely poised when the batting powerplay was taken at 168 for 3 after the 35th over.

It proved to be a disastrous spell for the Lankans as it lost three wickets in the next five overs, including the scalps of Chandimal and Jayawardene.

Jayawardene left first, trying to flick Vinay Kumar on the onside and missing a delivery headed onto his middle stumps. New man Angelo Matthews then pushed a delivery straight to short covers and called Chandimal for a non-existent single. Chandimal?s bat was still on the line when Dhoni broke the stumps.

Jayawardene made 43 off 49 balls with two fours and Chandimal’s 81 accrued off 91 balls with six fours and a six.

The batting powerplay was still not through when Thisara Perera (5) went for a mindless heave and lofted a catch for the long-on fielder. (PTI)