Bangladesh only managed 91 for in 20 overs while their chase of 164 as wicketkeeper-batsman Nigar Sultana and skipper Jahanara Alam remained unbeaten on 27 and 10 respectively.

India thrashed Bangladesh by 72 runs in their opening match of ICC Women’s T20 World Cup at Chinnaswamy Stadium, Bengaluru on Tuesday. Bangladesh only managed 91 for in 20 overs while their chase of 164 as wicketkeeper-batsman Nigar Sultana and skipper Jahanara Alam remained unbeaten on 27 and 10 respectively. Indian spinner Anuja Patil was the pick of the players in the second innings, who picked two wickets, claimed two wickets and was part of a run out and ended her four overs giving only 16 runs. Bangladesh’s top-order put together scored a total of 27 runs with their opening batsman Sharmin Akhter top-scoring with 21 runs off 27 balls.

Anuja Patil drew first blood by dismissing Ayasha Rahman in the fifth over. That wicket left Bangladesh Women at 19 for 1. Rahman while trying to go big only managed a top edge which was easily caught by Poonav Yadav at the short fine leg.  Two overs later, Sanjida Islam was sent back to the dugout by Poonam. Similarly, Sanjida threw away her wicket despite connecting it well but was caught at the mid-wicket by Anuja.

Sharmin was the only player who stayed at the crease for a long time until Anjuja struck again. Although it wasn’t by her bowling about this time it was some excellent field work from her that got Sharmin run out and left Bangladesh struggling at 35 for 3.  Poonam then came into action and did the job for her skipper. She tempted the batsman with a big room and while trying for a big shot, Rumana Ahemd went low for a slog sweep and holed out to deep midwicket where once again Anuja completed a superb catch.

Earlier, India Women posted to 163 for 5 in their 20 overs .This was India’s highest-ever Twenty20 International (T20I) total with their previous best being 151 for 5 against the same opponents in 2014 in Sylhet. Indian skipper Mithali Raj surpassed England’s Charlotte Edwards as the over-all top-scorer of ICC Womens World T20 with 567 runs. Before entering this match, Mithali was on 541 runs, short of 25 and she took no time to score those runs. She fell short of eight runs for a fourth fifty in the World T20s. 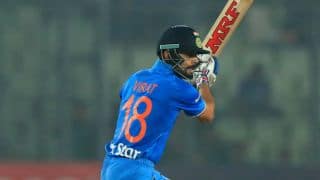