India thrash Zimbabwe by 54 runs in 1st T20I at Harare

India thrash Zimbabwe by 54 runs in 1st T20I at Harare

India have gone 1-0 up in the two-T20I series against Zimbabwe after beating the hosts by 54 runs at Harare. Zimbabwe got off to an excellent start thanks to their openers Chamu Chibhabha and Hamilton Masakadza. They put on 55 for the first wicket, when Chibhabha was dismissed in  the ninth over. From there,ZiImbabwe kept losing one wicket after the other and found themselves in deep trouble as they lost half their side with just 82 on the board in the 14th over. Masakadza, Charles Coventary, Elton Chigumbura and Craig Ervine were dismissed were already back in the hut and needed a miracle to win from there. Full updates: INDIA vs ZIMBABWE, 1st T20I at Harare

Hard-hitting batsman Sikandar Raza was also dismissed after that. From there, Zimbabwe were just about looking to play out their 20 overs with minimum damage. But Mohit Sharma got rid of Graeme Cremer for nine, but Zimbabwe somehow managed to go past the 100-run mark but it was never going to be enough to trouble India. Full SCORECARD: INDIA vs ZIMBABWE, 1st T20I at Harare

India will hope that they can win the second T20I too and register yet another clean sweep after easing past the hosts in the recently concluded One-Day International (ODI). Akshar Patel was the pick of the bowlers with three wickets and Harbhajan Singh picked up two wickets to make sure that the visitors were on top throughout.

Earlier, India managed to set Zimbabwe a target of 179 in the first T20 International (T20I) against Zimbabwe at Harare. India had gotten off to an excellent start reaching the 50-run mark in the 7th over of their innings, courtesy of some excellent batting from openers Ajinkya Rahane and Murali Vijay. Vijay was the first one to go when he was run out for a 19-ball 34. A couple of overs later, Rahane too was dismissed close to a run-a-ball 33. Zimbabwe were right back in this game now and could have sensed that they could restrict India to a low score.

But a small partnership between Manish Pandey and Robin Uthappa was developing but Pandey looking to clear the boundary holed out in the deep and again the momentum, which was slowly building up was gone and new batsman Kedar Jadhav, who was in good nick going into this game looked positive right from the beginning. Uthappa was going great guns at the other end and looked to make amends for his poor show in the One-Day International (ODI).  Jadhav, looking to be aggressive perished after he could not clear the inner circle at point, giving Christopher Mpofu his second wicket of the match.

Stuart Binny then joined his Karnataka teammate Uthappa and the duo looked aggressive right from the outset. But Binny was dismissed off the first ball of the final over, giving Mpofu his third wicket in the process. Zimbabwe bowlers to their credit kept up the pressure at the death and struck at regular intervals to cut down India’s run rate. Zimbabwe bowled a total of 25 extras, which could turn out to be pivotal in the end.

Earlier, India had won the toss for the first time in this tour and elected to bat first. Sandeep Sharma is the only new face in the playing XI from the ODIs and this happens to be his first international appearance for India as well. For Zimbabwe Taurai Muzarabani made his debut. India go into this match already having won the earlier ODI series 3-0.

Man of the match: Akshar Patel 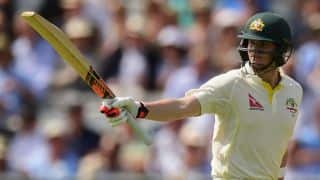