Girlfriends are still a no-no as far as international tours, according to the latest ruling.

Members of the Indian cricket team will get to spend more time with their family as the Board of Control for Cricket in India (BCCI) has finally allowed cricketer’s wives to accompany their spouses for the ongoing tour of Australia. The new ruling however, does not allow girlfriends similar privileges, reported NDTV Sports.

The Board felt that the move could help refresh the struggling tourists up ahead of the Boxing Day Test, with India trailing Australia 0-2 in the four-match series after a four-wicket defeat in the second Test at Brisbane.

The new ruling will allow the likes of Cheteshwar Pujara, Murali Vijay, Shikhar Dhawan, Ravichandran Ashwin and skipper MS Dhoni to be reunited with their families ahead of the Boxing Day Test at Melbourne. There will however, be no sight of Anushka Sharma cheering for beau Virat Kohli from the stands of the Melbourne Cricket Ground.

The BCCI had previously banned the presence of Wives and Girlfriends (WAGs) around cricketers during international tours following a 1-3 series humiliation in England earlier this year. Kohli’s frequent sightings with his girlfriend were blamed for his poor form with the bat. 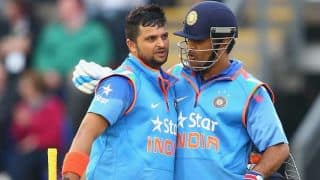