Mumbai: Just-crowned U-19 ICC World Cup winners, the Indian team was welcomed in a grand manner at the Chhatrapati Shivaji International Airport here on Monday. Senior officials of the Mumbai Cricket Association (MCA) received the victorious team led by captain Prithvi Shaw at the airport. Coached by batting great Rahul Dravid, the team landed at around 3 p.m.

Supporters at the airport cheered the young heroes. Manjot Kalra played a starring role with an unbeaten century as India overpowered Australia by eight wickets in the final to claim the ICC U19 World Cup for a record fourth time here on Saturday. The Indians were dominant throughout the tournament, winning all their six matches in comprehensive fashion on their way to the title.

Australia are second on the list with three titles. This is the second time that India have defeated Australia in the final. They had earlier defeated the boys from Down Under in the final of the 2012 edition. 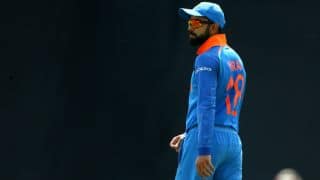