The tir-series also features the England Under-19 team as well.

Colombo: Madhya Pradesh right-hander Amandeep Khare hit a fine century as India U-19 beat their Sri Lankan counterparts by 4 runs via Duckworth-Lewis method in a tri-series match on Saturday. Batting first, India colts scored 284 for seven in 50 overs with Amandeep scoring 102 off 98 balls with 9 boundaries and a six. He shared a 107-run stand for the second wicket with Washington Sundar (77), who dropped anchor facing 115 balls. He had seven boundaries in his innings. Wicketkeeper-batsman Ishan Kishan (33) and Virat Singh (30) were the other contributors. In reply Sri Lanka managed 250 for five after their revised victory target was set at 255 in 47 overs. Full updates: India vs Sri Lanka 2015-16, 2nd U-19 ODI at Colombo

While chasing, Sri Lanka were cruising along at 198 for two in the 38th over before they fizzled out during the death overs. Seamer Rahul Batham (2 for 32) was the most successful bowler for India. Avishka Fernando (75) and Charith Asalanka (74) were two main contributors for the home team.

India Under-19 coach and batting legend Rahul Dravid on Sunday said he was close to identifying the team for the upcoming World Cup in Bangladesh next year.  India U-19’s put on an impressive performance here to beat Bangladesh by seven wickets in a tri-series final and remained unbeaten throughout the tournament which also featured Afghanistan. “This was a good tournament as we start preparing for the World Cup in January. Some of the boys have put in strong performances and we are close to identifying the core team for the World Cup,” Dravid told media persons 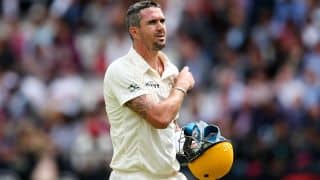