In contrast to captain Unmukt Chand, who led India to their third U-19 World Cup win in Australia last Sunday but is facing problems of low attendance in his college, teammate Harmeet Singh is fortunate as his college here has recognised his feats and supported him. 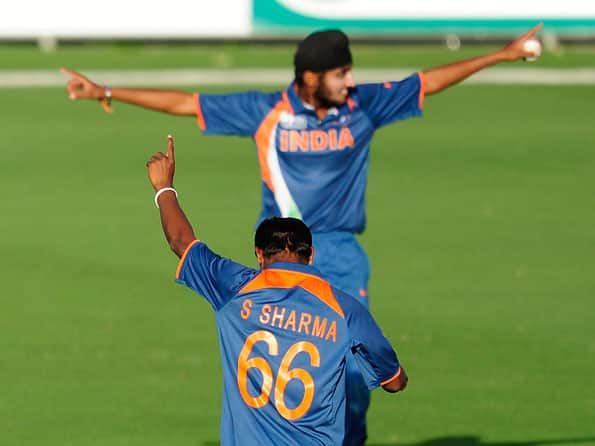 In contrast to captain Unmukt Chand, who led India to their third U-19 World Cup win in Australia last Sunday but is facing problems of low attendance in his college, teammate Harmeet Singh is fortunate as his college in Mumbai has recognised his feats and supported him.

“I won’t go into Unmukt’s case but my college has supported me a lot. They have not been judgemental about me playing for India. Even when I was nothing, they supported me.

“They recognised me as a budding cricketer and they saw potential in me,” said the young left-arm spinner after he was felicitated by Thakur College’s authorities who gave him a cash award of Rs 50,000.

On the other hand, Chand has not been allowed to sit for exams by St Stephen’s College in Delhi for want of sufficient attendance.

“A college or school’s support is very important. That support gives you motivation to perform even better. I won’t say that is a cause for my achievement but it is a part of my achievement and that motivates me to do better and achieve higher heights,” Singh told reporters after the function.

Asked about higher expectations from him after his World Cup performance, the 19-year old said, “Obviously people are talking about it but I need this feeling to sink in. The sooner it sinks, the better it is for me.”

The spinner, who had missed last year’s Ranji season as he was preparing for the Under 19 World Cup, said he will start practising at the Mumbai Cricket Association’s Bandra Kurla Complex ground from Monday for the coming season.

“Whatever celebrations were there, it is over now. I will go and practise the same way I did before the World Cup.

I know how hard I worked before the World Cup. I just came home once during the three months.

“The whole team has gone through hardship. It has not been an easy path for us. We have struggled in the World Cup.

There were no easy games for us. Even against Papua New Guinea, we were struggling. But we stuck together and did what best we know,” he said. (PTI)