Dream11 Team India Under-19 vs Afghanistan Under-19 Prediction Youth ODI Series – Cricket Tips For Today’s 1st ODI Match IN-Y vs AF-Y at Lucknow: In the first match of the five-game Youth ODI series, India Under-19 team will host Afghanistan Under-19 at the Ekana Cricket Stadium B ground, Lucknow on Friday. While the senior Afghans will take on Windies in the one-off Test match at the Ekana Stadium in Lucknow, their Under-19 side will be up against Indian team at the ‘B’ ground. The Afghan team will be led by Farhan Zakhil while Priyam Garg takes the responsibility of the home team.

The current crop of players in the Afghanistan U19s team were part of the Youth Asia Cup in Sri Lanka earlier this year. They qualified for the semi-final by defeating Pakistan but an abandoned semi-final eliminated them. The Indian team players, on the other hand, are fresh of featuring in the Under-19s Challenger Trophy. 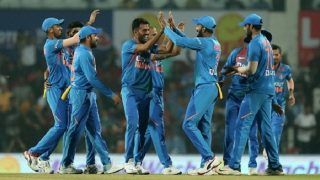