India have shrugged off any selection headaches that might have been coming their way.

Shrugging off selection headache, India took to the practice nets at Lord’s on Tuesday and if indications are anything to go by, are likely to continue with the five-pronged attack in the second Test against England starting on Thursday.

With five back-to-back Tests to be played in this series spanning 40-odd days, there is hardly any proper turn-around between the first two matches. The first Test at Nottingham had ended in a tame draw on Sunday.

With the pitch being the central theme at Trent Bridge, a significant pointer came across from those five days. Both teams will be moving forward with a five-pronged bowling attack unless pitches change dramatically.

India handed a Test debut to Stuart Binny in the first Test and the pitch prevented him from displaying his medium-swing abilities to the full. He did make good use of the opportunity to bat in the second innings, scoring his maiden Test fifty and digging the team out of a hole in doing so. The visitors came away from that match with status quo in the series and, if there is one question at all, it is perhaps to do with retaining the same composition.

The indicators from Tuesday’s net practice are that India have shrugged off any selection headaches that might have been coming their way.

The top batsmen all began with a hectic net session — Shikhar Dhawan and Murali Vijay getting things underway, and then Cheteshwar Pujara, Virat Kohli and Ajinkya Rahane batting for a while. It was interesting to note Kohli working out with fielding coach Trevor Penney giving him throw-downs, batting against a particular line and length.

The highlight of this net session though was Ravichandran Ashwin bowling to skipper MS Dhoni with Ravindra Jadeja batting in the adjacent nets. Binny was padded up to bat next-up, with Rohit Sharma not in the vicinity. He did get a chance later on, along with Gautam Gambhir, when the first XI from the Nottingham Test had finished their work-out.

The Indian team isn’t one to give hints in such practice sessions, but two days before the match, it can be said that they will persist with the five-bowler theory again. And by the looks of it, Binny and Jadeja are still in line ahead of Ashwin.

The Lord’s pitch showcased a tinge of green in the morning, but that is expected to disappear by time of the toss. Wickets here historically flatten out as the match progresses and so it will not be a surprise if India do not change their XI.

It heaps more pressure on the five frontline batsmen, with Dhoni batting at number six, akin to what the English batting will experience as well. The difference though is that they bat deep, with their top nine batsmen from Trent Bridge all boasting Test hundreds.

“With the pitches being quite slow, there is a need to play the extra bowler,” said English batsman Gary Ballance.

“We saw in Trent Bridge that the seamers bowled too many overs, both for us and India. And I can tell you that we would have struggled on that pitch with one less frontline bowler.

It does put pressure on the batsmen, but then scoring runs is our job and there is always going to be pressure to do that anyway.”

When asked pertinently of Ashwin’s non-selection in that first Test, Ballance added, “Trent Bridge is quite a seamer-friendly wicket and not many wickets are taken by spinners. We had a feeling that he might play, but we had a lot of right handed batsmen in our line-up too so Jadeja could bowl to them. So we weren’t really surprised then.”

If the Lord’s pitch turns out anything like the one in the previous Test, will the hosts be anticipating two Indian spinners playing this time. While that will only be known later, England playing two spinners is a long-shot, despite the inclusion of left-arm spinner Simon Kerrigan. Alastair Cook then will have to deploy some part-time options.

“On such dry wickets, it gets difficult to score if a bowler sticks to one line. Any captain will want part-timer options at that instant, a wrist spinner on a flat-track when it is not going anywhere,” said Ballance, who bowled an over on the fifth day as the game meandered to a draw.

“I will only bowl in the nets for now and then see where it goes from there. But playing as we did, we came close to victory on a flat pitch in Trent Bridge. We will take confidence from that day five morning, and try and bowl like that again. We are looking for a win quite badly,” he added. 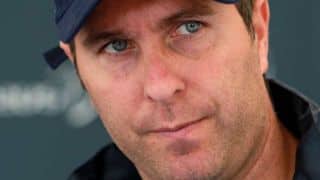