When West Indies scored 311 in the first innings, chances were that this Test match would last longer than the one at Rajkot. But 16 wickets on an eventful third day was enough to force an early result. Again, in three days. In the first session, Jason Holder had bowled admirably to pick up his fifth five-wicket haul in Tests, a spell that triggered a collapse during which India lost their final six wickets for 53 runs and got bowled out for 367, attaining a slender first-innings lead of 56.

Holder’s hardwork, however, was undone when West Indies came out to bat in the second innings. Umesh Yadav and Ravindra Jadeja shared seven wickets to bundle out the Windies for 127 inside 50 overs. India, needing 72 to win, got to the target without breaking much sweat, and won the match by 10 wickets to complete a 2-0 sweep as play went into the extra half hour period.

Prithvi Shaw and KL Rahul saw India through to 40 in eight overs. But with the light dimming and still 32 to get, Shaw, in order to wrap things quickly, stepped out but missed connecting a hoick. It was a pretty usual stumping chance but substitute Jahmar Hamilton made a complete mess of it, adding to his already woeful match. That was the single blip in India’s innings. Shaw, who took a blow to his elbow and survived a leg before shout while ducking, scored the remaining runs. Rahul was content remaining not out on 33 allowing the young Shaw to score the winning runs.

It was Umesh, who paved the way for India’s win with his maiden 10-wicket match haul. Having finished with career-best figures of 6 for 88 in the first innings, the Vidarbha pacer took 4 for 45 to complete a perfect 10. He was assisted by Jadeja, who took three wickets for 12 runs in 11 overs. Together, they prevented West Indies from escaping with a sizeable lead.

After bowling India out, the West Indies’ top order was rattled. From 45 for 4, first-innings rescuer Roston Chase and Sunil Ambris knocked off the deficit, but Umesh returned to break the stand. West Indies showed some resistance through a 38-run stand between Holder and Ambris but their dismissals in back-to-back overs took out the final ounce of fight out of them. Jadeja and R Ashwin took care of the lower order, before Umesh castled last man Shannon Gabriel to bring the innings to a close.

Umesh, who had picked up the last two West Indies wickets to fall in the first innings, missed his hat-trick by one ball. A dot off the first delivery, Umesh removed opener Kraigg Brathwaite, edging to Rishabh Pant. Ashwin, having played a crucial innings with the bat earlier, struck in his second over to remove Braithwaite’s partner Kieran Powell. Two ducks, West Indies 6/2.

Shai Hope and Shimron Hetmyer showed resilience with a 39-run stand, scoring seven boundaries between them, but their dismissals in consecutive overs allowed India to sneak through. Kuldeep Yadav dismissed Hetmyer for the third time this series, the batsman dancing down and edging to Cheteshwar Pujara and gully, before Hope edged Jadeja to Ajinkya Rahane to first slip for his second catch of the match. Umesh then snuck through the defence of Chase for the fifth wicket, before out walked Dowrich, who was off the field since yesterday after taking a blow to his knee. Umesh took all but one ball to send him back to the dressing room. That put him on a hat-trick second time in the match.

Before Umesh’s exploits, Holder was the star. Resuming their innings at 308 for 4, overnight batsmen Pant and Rahane were expected to give India a sizeable lead. Rahane struck a boundary in the first over to hand India the lead, but shortly after, Holder struck with the second new ball. Assisted by movement in the air, Holder landed a ball around good length area, one that took off and found the edge of Rahane’s bat to be taken by Hope at gully. Two balls, later, Holder produced an in-dipper, and Jadeja, the centurion from the previous game, was out for a duck.

Gabriel, who was unlucky to have not got Pant for 24 a day earlier, finally got his man. The wicketkeeper batsman fell in the 90s for a second consecutive occasion, slapping a length ball straight to Hetmyer at cover, who dived to his right to complete a brilliant batch. Hopes were pinned on Ashwin, to build on his fine batting record against West Indies but regular wickets at the other end forced him to play the waiting game.

Ashwin’s partner, Kuldeep was given a hard time by Holder with numerous plays and misses but the Windies captain produced an inswinger than breached the batsman’s defence and sent his off-stump cartwheeling. Umesh was taken sharply by Hamilton off Jomel Warrican before Ashwin hit two quick boundaries to take India past 350 in the company of a hobbling Shardul Thakur. He helped himself to two more fours before Gabriel uprooted his middle stump to pick up his third. 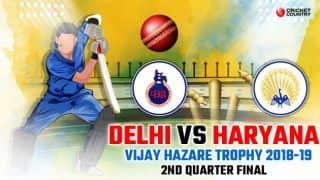 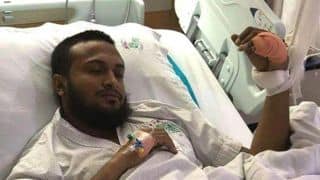