Siddle last played an ODI in 2010 against Sri Lanka at the same venue before lack of wickets shut the door on him in the 50-over format.

Peter Siddle will be playing his first one-day international in nine years after he was named in Australia s Playing XI for the first ODI against India in Sydney on Saturday. There was no place for cover player Ashton Turner, with Shaun Marsh and Peter Handscomb comprising the middle order along with Glenn Maxwell.

Siddle last played an ODI in 2010 against Sri Lanka at the same venue before lack of wickets shut the door on him in the 50-over format even as he continued playing Tests. When he takes the field in Sydney, it will set a world record for the longest gap between appearances for an Australia player. The record is currently held by Tim Zoehrer who had a break of six years and 282 days.

Siddle impressed with a low economy rate of under four in the JLT Cup and picked up a three-wicket haul for Adelaide Strikes against Sydney Thunder in the Big Bash League.

For Sidds to go away and work on the skills that he’s brought to the table over the last couple of years in Big Bash cricket is outstanding,” Australia captain Aaron Finch said. “He well and truly deserves his spot. Any tour you go on, Sidds is one of the first picked I would think for what he brings to the team and the skill set he brings.

Also making a comeback to the team is offspinner Nathan Lyon, which means legspinner Adam Zampa misses out to accommodate three frontline fast bowlers in Siddle, Billy Stanlake and Jhye Richardson, with Marcus Stoinis being the fast bowling allrounder.

“Adam’s very stiff to miss out on a game tomorrow. He’s performed reasonably well for us in the last little bit since he’s made his comeback. It’s unfortunate for him to miss but we feel those two [Nathan Lyon and Glenn Maxwell] together could play a really big part over the next six to 10 months,” Finch said about Zampa’s exclusion.

Australia also shuffled their batting line-up with wicketkeeper batsman Alex Carrey set to open the innings with Finch and Usman Khawaja batting at No.3, followed by Marsh, Handscomb, Maxwell and Stoinis. Carrey has mostly batted at No. 5 but has opened the innings on a couple of instance in T20Is.

“It’s just an opportunity to see Alex play in a position he’s done quite a bit in Big Bash and one-day cricket. It’s a position he’s performed really well within the last couple of years. He’s been shuffled around the order a bit in the last little while… and he’ll get a good opportunity up there,” Finch explained the new opening combination. 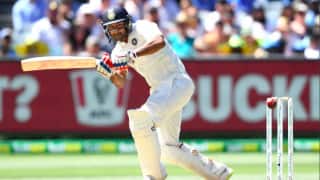 I persisted, didn’t let go and that worked for me: Mayank Agarwal