Australia and India may play the first Test in Adelaide instead of Brisbane.

The first Test between India and Australia may be shifted from Brisbane to Adelaide, the adopted home town of Phillip Hughes, providing both teams more time to come to terms with the tragic death of the cricketer who was to turn 26 on Sunday.

The Sydney Morning Herald has reported that Adelaide, which was scheduled to host the second Test from December 12 to 16, could be the opening match of the four-match series. The funeral of Hughes, who died after being hit by a bouncer during a domestic game, will take place in the sports hall of his old High School in Macksville, New South Wales on Wednesday.

The report further suggested that the Brisbane Test, supposed to take place from December 4, could be accommodated between the Adelaide Test and the Boxing Day Test (December 26-30). Hosting the match is also possible after the Sydney Test (January 3-7), which precedes the One-Day International (ODI) tri-series starting January 16.

Cricket Australia on Saturday postponed the Brisbane Test to an unspecified date to give players more breathing space after Hughes’ funeral.

CA CEO James Sutherland had said, “These are extraordinary circumstances and we simply couldn’t or wouldn’t expect our players to be emotionally ready to start a Test match the day after farewelling (sic) one of their teammates. Their welfare is our absolute priority. They are grieving and to expect that they could play a high-pressured, five-day Test match the following day is out of the question.”

“We appreciate the incredible understanding and support of the Board of Control for Cricket in India. It has been nothing short of outstanding during these difficult times,” he added. 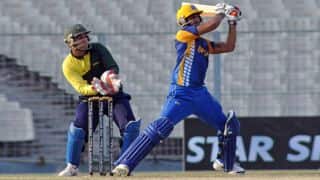 Allan Donald: Bouncers should not be outlawed as we reconsider safety in cricket