India vs Australia 2014-15: Michael Clarke likely to be fit for 1st Test

India vs Australia 2014-15: Michael Clarke likely to be fit for 1st Test

As long as he's fine to do the running and can bat he'll play, Lehmann said off Clarke.

Australian captain Michael Clarke is on his way to achieving full fitness ahead of the first Test at Adelaide, which makes him a likely starter. If his training session was anything to go by, he hasn’t been troubled by his Hamstring injury.

The selectors are positive about Clarke’s fitness after he got through an entire practice session comfortably. This has infused enough confidence in the coach Darren Lehmann as well. Lehmann was quoted by the BBC as saying

“As long as he’s fine to do the running and can bat he’ll play. We’ll get him batting on Saturday and see how he goes. We’ll be guided by medical staff, the captain himself and selectors.” Fawad Alam to lead Pakistan A against Kenya 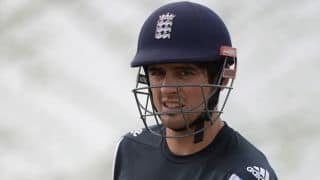