India vs Australia 2015-16, 4th ODI at Canberra: One umpire walks off, the other wears a helmet!

India vs Australia 2015-16, 4th ODI at Canberra: One umpire walks off, the other wears a helmet!

Australian umpire John Ward came out wearing a helmet in the fourth ODI between India and Australia, while co-umpire Richard Kettleborough walked off after being struck on the shin.

Australian umpire John Ward caused a bit of a stir when he came out to officiate wearing a helmet in the fourth One-Day International (ODI) at the Manuka Oval in Canberra on Wednesday. It proved to be a good idea, as in the 18th over of the innings his co-umpire Richard Kettleborough walked off after being struck on the shin by a hard shot from Aaron Finch off the bowling of Ishant Sharma. Ward had been struck on his head while umpiring in a Ranji Trophy match only a few months ago. In fact, it was Barinder Sran — rested from this match —  who played the shot that hit Ward on the head. He was immediately rushed to a nearby hospital, but was stable and remained conscious throughout. Live Cricket Scorecard: India vs Australia 2015-16, 4th ODI at Canberra

Ward learnt from that ordeal and came out wearing a helmet for the fourth ODI between India and Australia. However, it was his umpiring partner Kettleborough who got injured in the match. Ishant bowled a full delivery to Finch, who smashed the ball back past the bowler. Ishant managed to get a finder onto the ball, which proceeded to hit the umpire on his shin. He stayed on the field for almost 10 overs after that, before walking off during the drinks break. He was replaced by umpire Paul Wilson. Live Cricket Blog: India vs Australia 2015-16, 4th ODI at Canberra

Earlier, David Warner and Finch put on a century opening stand as Umesh Yadav and Bhuvneshwar Kumar were both expensive. Ishant pulled things back by bowling a few tight overs, but Gurkeerat Singh and Rishi Dhawan proved ineffective. Ravindra Jadeja then came in and got hit for a slew of boundaries in his first couple of overs.

Umpire Ward is wearing a helmet after being struck in the head by a ball last year https://t.co/QhnH6vqneK #AUSvIND pic.twitter.com/Bhp9xxujV8

Australia won the toss and elected to bat first, having already secured the series 3-0. Both teams made one change each, with Australia bringing in Nathan Lyon in place of the lacklustre Scott Boland, and India resting Barindar Sran and bringing back Bhuvneshwar Kumar. Gurkeerat Singh Mann and Rishi Dhawan, both of whom made their ODI debuts in the third ODI at the Melbourne Cricket Ground (MCG), retained their spots in the line-up. 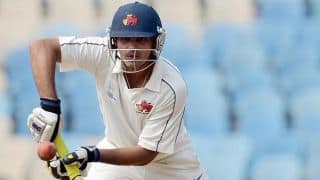 Hiken Shah: Was forced to use the word ‘fix-up’ by BCCI’s Ravi Sawani during IPL fixing inquiry

Video: When the Indian Under-19 World Cup team trained at the iconic village where Sholay was shot