In case Steven Smith misses out the 1st T20I against India at Ranchi, swashbuckling opener David Warner is set to lead the side.

Visitors Australia are already under pressure following a 1-4 loss against hosts India in the just concluded five-match ODI series. Meanwhile, they have a further concern ahead of the upcoming first T20I at the JSCA International Stadium Complex in Ranchi on Saturday, with skipper Steven Smith in the danger of missing out the tie owing to a shoulder injury. According to a Cricket Australia (CA) spokesperson, Smith underwent an MRI scan on Thursday, while he also missed the training session on Friday, making his appearance in the tie doubtful. The final decision of his availability is most likely to be made before the toss. In case he misses out, swashbuckling opener David Warner is set to lead the side, as reported by Cricbuzz. FULL CRICKET SCORECARD: India vs Australia 2017, 1st T20I at Ranchi

Comprehensive winners in the ODIs, India would aim to extend the domination, while Australia’s listless team would be eyeing a change of fortunes in the three-match T20 series beginning here on Saturday. India won the one-day series against Australia 4-1 to reclaim the No.1 spot in the ICC rankings and the hosts would be aiming for a perfect finish to the campaign with the T20I series. A reliable pool of bowlers to complement their traditionally strong batting has made Virat Kohli’s side quite formidable, especially on home turf, as reported by PTI. 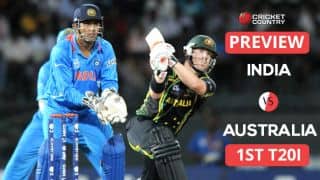 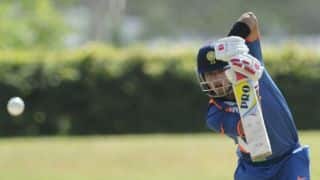