Chennai: Former India captain Mahendra Singh Dhoni on Sunday completed the coveted landmark of 100 international half-centuries across all three formats with an innings of 79 against Australia in the first ODI on Sunday. The 36-year-old Dhoni is now the 13th cricketer in the history of international cricket to complete a ton of 50’s. Among Indians, he is fourth after Sachin Tendulkar (164), Rahul Dravid (146) and Sourav Ganguly (107). It was Dhoni’s 66th ODI half-century in his 302nd One- dayer, apart from 33 that he got in 90 Tests and the one in 78 T20 Internationals. Dhoni now has 9737 runs in ODIs and requires 263 more runs to complete the 10,000-run milestone in the 50-over format. FULL CRICKET SCORECARD: India vs Australia 2017, 1st ODI at Chennai

Dhoni knows his role. The blade that blasted helicopter shots in abundance has withered a bit, but his knack of hatching game plans is as eminent as ever. Knowing India were staring down the barrel and Hardik Pandya s belligerence was the only ammunition that could shiver the Australians, Dhoni contently dealt in singles. Dhoni was in no hurry. He made sure Pandya wasn t either. The pair dulled things down, sucking all the zeal the oppositions had set their feet with. And as the momentum swung back to them, Dhoni strategically let Pandya go all guns blazing. 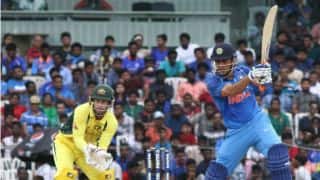 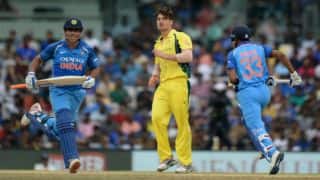