As the wickets continue to grasp limelight in the India vs Australia Test series, the pitch at Ranchi is expected to have no bounce in it, and it will be spin friendly from day one.

Before the series took off at Pune, hardly anyone had expected Australia to hammer India by 333 runs inside three days. Being a contest between the Nos.1 and 2 teams in the ICC Test ranking, a tough contest was on the cards. But Australia had outplayed Virat Kohli and his men in every department, sealing a victory against the home giants. When both teams met each other for the second Test at Bengaluru, everyone expected India to bounce back and settle scores. India did not disappoint for the second time. Ravindra Jadeja and Ravichandran Ashwin once again scripted a famous victory for India which looked a little dicey at one point. Full Cricket Scorecard: India vs Australia, 3rd Test at Ranchi

With the series levelled 1-1, both teams stand equal chance to emerge victorious by the end. With two games left and given the fact that previous two encounters have yielded results for both teams, the third Test at Ranchi will play a very important role. Despite their defeat at Bengaluru, Australia would have had their confidence high. Unfortunately, an untimely injury to Mitchell Starc has weakened their bowling department. Starc has been ruled out of the rest of the series with a stress fracture in his right foot; Pat Cummins has been named his replacement.

Starc is not the only Australian to return home: Mitchell Marsh, too, has been ruled out for almost nine months due to prolonged shoulder injury. Glenn Maxwell and Marcus Stoinis are frontrunners to take up Marsh s position, though Australia are yet to confirm about. Nathan Lyon, too, suffered a cracked skin on his right index finger during the second innings of Bengaluru Test, but the off-spinner is confident that he will be able to play at Ranchi despite the injury. India, on the other hand, will miss Mohammed Shami, while Hardik Pandya has also been ruled out with an injury.

There have been a lot of speculations regarding how and whom the wicket will assist as the previous two Tests witnessed spinners dominating the proceedings. As the wickets continue to grasp limelight in the India vs Australia Test series, the pitch at Ranchi is expected to have no bounce in it, and it will be spin friendly from day one.

This may increase the conundrum for both sides regarding their playing XI. However, Australia having played the first two Tests may be relaxed as they have spinners who can run through the strong Indian batting line-up.

What is the schedule for India vs Australia Test series?

The Test series has four Tests, to be played at Pune, Bengaluru, Ranchi and Dharamsala. The first Test began on February 23 and the last Test will end on March 29.

Where will the India vs Australia third Test be played?

The third of the four-Test series between hosts India and visitors Australia will be played from March 16 to 20 at the JSCA International Stadium Complex, Ranchi.

Where to watch India vs Australia Test match live on TV?

How to watch India vs Australia live streaming online?

The live cricket streaming of the match will be available on HotStar, with both English and Hindi commentary.

What time does the live coverage of India vs Australia start?

What are the squads of two teams for India vs Australia 2017 1st Test? 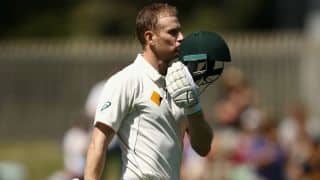