Umpire Nigel Long had given Pujara out twice off Nathan Lyon, but the right usage of the Decision Review System meant, the No.3 bat, continued on

Cheteshwar Pujara’s resilient 123 in the first innings handed India a big advantage as they finished with 250, despite being under the pump at 127/6; and that was well exploited by the bowlers as they bowled out Australia for 235, handing India a slender lead of 15 runs.

Pujara rated his knock as one of his best and praises showered in from all corners for the Saurashtra batsman.

In the second dig, after Murali Vijay and KL Rahul added 63 runs for the opening wicket, Pujara found himself in the middle and continued on from where he had left off with yet another watchful innings, to take India to a strong position alongside his skipper Virat Kohli.

However, unlike his first innings which was nearly chanceless, Pujara was luckily twice on day three. Umpire Nigel Long had given him out twice off Nathan Lyon, but the right usage of the Decision Review System meant, the No.3 bat, continued on.

Here’s how the two instances played out:

23.5 – Nathan Lyon to Cheteshwar Pujara. no run, NOT OUT! Nothing on the Hot Spot. Nothing on the Snicko. The decision is overruled. A flatter off spinner outside off, turning back in just a hint. Pujara stays back to play inside the line but seems to have missed it. Paine though collects the ball, puts in an appeal and the umpire raises his finger. Pujara looks down for a moment and then goes for the DRS. The replays roll in and Che survives. Good use of the technology. That was a great delivery, to be honest. The length was such that Pujara was in two minds with his footwork.

The Aussies thought they had the big wicket of Pujara, but it wasn’t to be! #AUSvIND@SpecsaversAU #SpecsaversCricket pic.twitter.com/Z5rSIB4NjW

39.2 – Nathan Lyon to Cheteshwar Pujara. no run, NOT OUT! That is going over the stumps! Once again Pujara makes excellent use of the review in this innings. Lyon can’t believe it. However, Pujara could not believe it when he was given out. Coming to the ball now – this was tossed up outside off, Pujara comes down the track but does not get to the pitch of it. He tries to pad it away with his bat behind the pad. An appeal follows and the umpire agrees. Pujara has a baffled look on his face and he reviews immediately. The replays roll in and it shows the ball to be going over. The on-field call has to be overturned.

India made 250 and bowled up Australia for 235, to take a lead of 15 runs on day three of the 1st Test at Adelaide. The first 50-plus opening stand between KL Rahul  and Murali Vijay outside of India put the visiting team in command over Australia on a rain-hit third day at Adelaide Oval, where by tea the lead was 101. 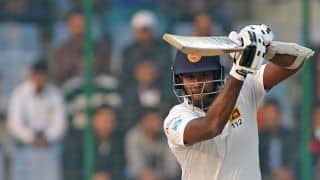