Despite a return to form in domestic circuit, Australia's Shaun Marsh continues to churn out low scores in international cricket.

Despite a return to form in domestic circuit, Australia‘s Shaun Marsh continues to churn out low scores in international cricket. He has been enduring a horror show with the bat since January 2018.

Against England during the Sydney Test last year, Marsh scored 156 and following that hasn’t been able to cross 40 in 13 innings. In fact, only five time out of those has he managed a score in double-digits.

And when he was out for two against India in the ongoing Adelaide Test, it was the left-handers sixth straight single-digit score in a row. He thus became the first Australian top-five batsman since 1888 to do record six such scores in succession.

The manner of his dismissal would have frustrated Marsh more. With Australia in a tricky spot, Marsh chased a wide delivery from offspinner R Ashwin and dragged it onto the stumps to be bowled for 2. It was the fifth time Marsh has fallen to Ashwin and his dismissal left Australia at 59/3 in reply to India’s first innings of 250.

Former Australia opener Simon Katich was surprised at the shot selection of Marsh who came into the Test with impressive performances in Australia’s domestic first-class competition Sheffield Shield. “Shocking shot from Shaun Marsh,” former Test opener Simon Katich said while commentating on SEN Radio. “He’ll be feeling the pressure … he knows he didn’t make any runs in the UAE. It’s a tough situation … he’s done all he possibly can leading into the Test.”

“I don’t care how good you are. When you first go to the crease you are vulnerable. That’s exactly what’s just happened to Shaun Marsh. His eyes lit up, he saw the boundary. Good tactics by India and Ashwin is in the contest,” he said. 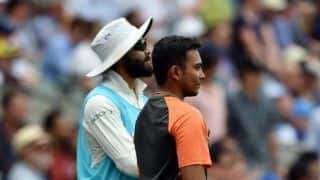