For his record-setting batting performances in India‘s landmark 2-1 Test series victory over Australia, Cheteshwar Pujara was named Man of the Series on Monday after the fifth day’s play at the SCG was washed out.

This is the first time in his 68-Test career that the 30-year-old has won this award. Pujara scored 521 runs in seven innings at an average of 74.42, scoring hundreds in India’s victories in Adelaide and Melbourne and the draw in Sydney, apart from one fifty.

He faced 1258 deliveries, comfortably the most by any batsman; he scored the most runs and the most centuries; he shored up India’s batting where others struggled, including Virat Kohli. In Adelaide, in facing 450 deliveries for his 123 and 71, Pujara laid down the marker for how to to bat in Australia. (ALSO READ: India win first Test series in Australia following SCG wash-out)

“It’s a great feeling for all of us. We’ve been working really hard to win a series overseas, and especially doing it in this country, it’s never easy,” said Pujara on Monday. “The first hundred was special, scoring it in Adelaide and going 1-0 up is something which we were all aiming for. When you do that, there’s a good chance of winning the series. This is definitely the best squad I’ve been a part of. Congratulations to the bowlers. Taking 20 wickets in never easy.”

During the course of his 373-ball 193 at the SCG, Pujara took his tally of balls faced in the series to 1258, meaning he claimed the record for visiting batsmen in a series of four Tests or less on Australian soil. Back in the 1928-29 Ashes, England legend Herbert Sutcliffe faced 1237 balls across 7 innings for his 355 runs. During India’s tour of Australia in 2003-4, Rahul Dravid faced 1203 deliveries while scoring 619 runs in eight innings for an average of 51.45, with one double-hundred and three fifties.

Overall for visiting batsmen in Australia, Pujara’s 1258 deliveries consumed this series ranks as the ninth most.

“As a batsman, you just need to get used to pace and bounce. Playing in different conditions, in South Africa, in England, in county cricket has helped me improve my technique,” said Pujara. “Test cricket is my priority, it’ll always remain my priority.”

Pujara’s skipper had words of praise for his series-defining performances.

“I want to give a special mention to Pujara. He’s one guy always willing to accept things. He’s the nicest man around,” said Kohli. 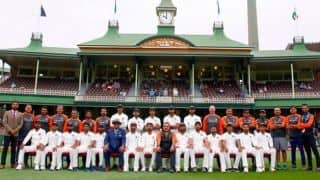 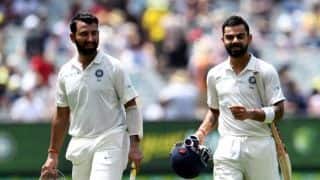