To maintain his consistency when not playing, Bhuvneshwar spent a lot of time in the nets.

Bhuvneshwar Kumar s career as an Indian pace bowler has been reduced to appearances in ODIs and T20Is for almost a year, as a mixture of injuries and workload management saw him sit out 11 consecutive Test matches.

During the limited-overs leg of India s tour to England last year, Bhuvneshwar injured himself and missed all five Tests. He returned to play the Asia Cup in the UAE where he featured in five ODIs. He was then rested for two Tests at home versus West Indies, slotted back for three ODIs and two T20Is against the same opposition and then in in Australia played the three T20Is in November. Bhuvneshwar had to wait six weeks to get another chance once the ODIs started last Saturday.

Speaking to reporters at Adelaide Oval on Monday, Bhuvneshwar said that getting back to a live match scenario – he bowled 10 overs for 66 runs in the first ODI, taking two wickets – after more than a month on the sidelines was a challenge but one that he had worked hard to be ready for. (ALSO READ: Bhuvneshwar Kumar completes 100 ODI wickets)

It did impact me. Matches are totally different when it comes to bowling. I was trying everything to be in rhythm in the nets, but it can t be 100% until you come to a match, he said. It wasn t great in the last match but neither was it bad. It could improve, of course.

To maintain his consistency when not playing, Bhuvneshwar spent a lot of time in the nets while deemed surplus to India s requirements in the Test series.

See, in the nets I was not planning to bowl in the one-dayers. I was preparing to bowl in any of the Test matches, he said. There wasn t anything specific I could do. It was just normal bowling. Increasing the number of overs .. four to six to eight to ten that was the key thing for me, to be niggle-free and be in bowling rhythm. (ALSO READ: 2nd ODI: Australia target improvements, India need a win)

In England last summer, his bowling speed had dropped during the ODIs but at the SCG on the weekend it was back in the 135kph range.

I was going through a niggle at that time, so you can t bowl at 100% during that period. Since then I ve trained a lot, especially during this past month of the Test series, so that s the reason I am back to bowling 130-135. The main thing is that I am niggle-free right now, said Bhuvneshwar. It s been a mixture of weight-training, running and bowling a lot in the nets. Its about getting back to bowling fitness. In a week, I have to train a few sessions in the gym and a few in the ground and then twice or thrice in the nets. It kept increasing each week as the one-day series neared.

With Jasprit Bumrah rested after bowling 157.1 overs across four Tests in Australia, India s pace attack for the first ODI comprised Bhuvneshwar, the left-arm quick Khaleel Ahmed and Mohammed Shami. The trio conceded 167 runs in 28 overs – an economy rate of 5.96 – with Bhuvneshwar the only one to manage a wicket.

The fourth pace option in the current ODI squad is Mohammed Siraj, and Bhuvneshwar was confident in the core group s ability.

After losing to Australia by 34 runs on Saturday, India need to win the second ODI to force a decider at the MCG on Friday. Acknowledging that India s top order not clicking was very rare for the team, Bhuvneshwar said that the visitors were preparing to win the next two matches.

We ve been in this situation before in India, so we know its not impossible to win the series, he said. We re preparing in a manner to win the next two matches. Its a kind of knock-out for us. We can t afford to lose this match. We re not thinking anything different from how we ve been thinking for the last couple of years. We just want to win the match and everyone is positive for that. 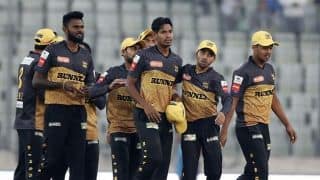 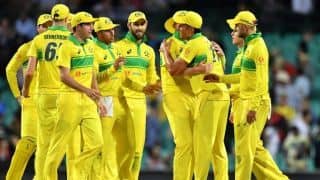