Nathan Lyon was Man of the Match in Australia's crushing win over India in Perth.

With 16 wickets in two Tests against India, the last eight coming in a match-winning performance in Perth where Australia won by 146 runs to level the series at 1-1, Nathan Lyon has lived up to his pre-series billing as a major threat to the Indian batsmen.

Lyon claimed 5/67 and 3/39 across two innings at Optus Stadium, his wickets including India captain Virat Kohli in the third innings, to be named Man of the Match. His seventh five-wicket haul in Tests versus India drew Lyon with Muttiah Muralitharan for the record.

“It is amazing to play a role in a team victory and to have the support here in Perth and all around Australia has been fantastic. Thanks for all the support,” said Lyon after victory on Tuesday. “It’s pretty fair to say we have been in drought and to wrap up their tail pretty quickly was special. My role changed a fair bit to a more attacking role in Adelaide to a defending role here. Definitely those two wickets (Virat and Ajinkta Rahane) are special.

“Virat is the number one player in the world, to compete against him and to be able to take his wicket is pretty special. Pant is a wonderful striker of the ball, he’s a special talent and it’s always a great challenge to bowl to him. My brother (Brendan Lyon) has been helping me with the batting. I am not a very good batter, so I am trying to improve a little bit and play my role.”

The second Test is at the MCG from December 26. 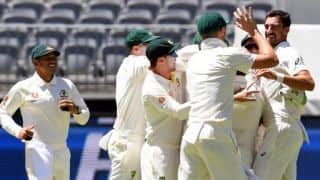 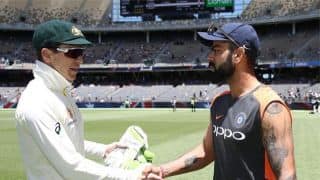