The Perth pitch on which India faced Australia in the second Test has reportedly been rated 'average' by the ICC match referee Ranjan Madugalle.

The Perth pitch on which India faced Australia in the second Test has reportedly been rated ‘average’ by the ICC match referee Ranjan Madugalle.

Australia beat India on a pitch that offered uneven bounce to draw level in the four-Test series.

During the second Test at the Perth’s new Optus Stadium, Australia opener Aaron Finch had to retire hurt after copping a blow to his finger. His opening partner Marcus Harris was hit on the helmet by a lifter from Mohammed Shami resulting in him falling flat on the ground. Then there were few that didn’t rose as expected as Pat Cummins witnessed after being bowled by Jasprit Bumrah during the second innings.

The third Test will be played at the Melbourne Cricket Ground (MCG), which was rated poor, also by Madugalle, after producing a drab draw last year.

However, veteran pacer Peter Siddle has dismissed any notions of a repeat of last year’s result and is confident curator Matt Page will prepare a result-oriented surface.

“The boys should be excited because it’s definitely going to be a result wicket I think, going by what’s happened in the first couple of Shield games this season,” Siddle told Australian radio station SEN.

“It’s played alright this year. He (Page) knows what he’s got to do now leading into the Test. It was actually a good cricket wicket (when Siddle played for Victoria at the MCG last month). There was going to be a result; we got washed out on the last day needing 100 runs.”

The venue is under the microscope following its assessement. A ‘poor’ rating results in three demerit points and a ground that accumulates five such points over a rolling five-year period will be banned for hosting international matches for a year as per ICC guidlines. 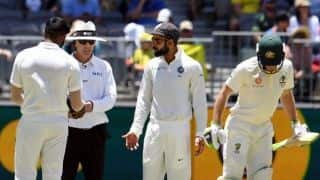