Handscomb was drafted back into Australia's XI for the SCG Test after making 68 runs in four innings.

Shane Warne has criticised the decision to add Peter Handscomb to Australia’s XI for the fourth Test against India in Sydney, arguing that the Victoria captain was not yet ready for international cricket.

Handscomb, who played in Adelaide and Perth before he was dropped for the MCG Test after scores of 34, 14, 7 and 13 in the series, was singled out by skipper Tim Paine on Wednesday for his ability to play spin but Warne – who last month questioned the batsman’s technique – was critical of the selection.

Peter Handscomb, they say he s such a good player of spin? They didn t take him to the UAE, Warne said on Fox Cricket. Last week he had a technique that didn t last in international cricket, now they bring him straight back in because they (India) might play two spinners. India have got some handy quicks as well. (ALSO READ: India play KL Rahul, Kuldeep Yadav and bat at the SCG)

I would have liked to see Mitchell Marsh maybe get another game or a Matthew Wade, try Aaron Finch down in the middle but I don t think Handscomb, he added. I don t think it s fair on him (Handscomb) to keep putting him out there when he s not quite ready for international cricket.

After making 68 runs in four innings at Adelaide and Perth before he was dropped, Handscomb vowed to push hard for a recall in the series.

Handscomb made his Test debut against South Africa in November 2016. He then scored 344 runs in a home Test series against Pakistan while averaging over 114 with two centuries and a fifty. During the Border-Gavaskar Trophy in 2017, as the entire Australia team was troubled by Indian spinners, Handscomb played some gutsy innings. In 2018, as the runs dried up, he was dropped after the tour to South Africa where he played just one Test.

Australia need to beat India at the SCG to level the four-match series 2-2. 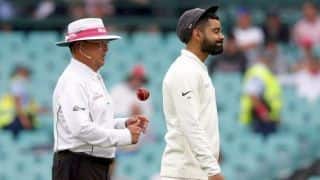