India played an unchanged XI on a Nagpur track Kohli predicted would deteriorate.

Australia skipper Aaron Finch has won the toss and opted to bowl against India as the second ODI got underway in Nagpur on Tuesday.

Virat Kohli said it was a “no-brainer” to bat on a surface he termed “rough” and predicted would deteriorate later in the evening.

India played what they felt was their strongest team in Hyderabad, which meant that Yuzvendra Chahal sat out, and played the same XI. (UPDATES: INDIA vs AUSTRALIA, 2nd ODI)

For Australia, Shaun Marsh slots back into the team, which means that Ashton Turner, who made his debut in Hyderabad, drops out. Nathan Lyon took Jason Behrendorff’s place. (READ: With a little help, MS Dhoni 2.0 vital to India’s World Cup)

The VCA Stadium in Nagpur is known to be high-scoring. In eight ODIs there, six times 300 has been achieved. In 2009, India posted 354/7 and won by 99 runs, which is the highest total there. In 2013, Australia made 350 and India chased it with six wickets and three balls remaining. 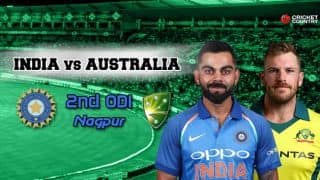 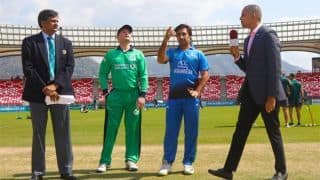