Peter Handscomb scored 52 and was involved in a 99-run partnership with centurion Usman Khawaja.

From 0-2 down to winning the five-match series 3-2, Australia have registered a historic series win after a convincing 35-run victory in the series decider against India at the Feroz Shah Kotla on Wednesday.

Aaron Finch and Co. have peaked right in time for the ICC World Cup 2019 and Peter Handscomb, who scored 52 and was involved in a 99-run partnership with centurion Usman Khawaja, reckons an ODI trophy will serve as the right confidence booster. (ALSO READ: Match highlights)

Means a lot to come over in India and win a series. To do it now gives us great confidence going towards the World Cup. Something special (to win the series from 0-2 down) to go with our chase the other night (in Mohali). Feels really special to come down here and win the series, Handscomb said after the match. (ALSO READ: Bishan Singh Bedi slams poorly kept Feroz Shah Kotla pitch)

Elaborating on his partnership with Khawaja, he explained: It was my role, to take the game as deep as possible, till the 40th or 45th over without losing too many wickets. Obviously had Uzzie (Khawaja) at the other end and he batted extremely well through the series.

Meanwhile, Pat Cummins, who pocketed 14 wickets the highest wicket-taker in the series has pressed his case for spot in the World Cup. Hopefully, I will continue this form through the World Cup. I would not want to be a selector, it’s gonna be a tough job with few guys still to come in, he said. (ALSO READ: It is going to be tough to pick the World Cup squad: Justin Langer after India series win)

The spinners bowled well and the quicks were incredible as well. The batters have stepped up today. Playing consistent cricket is the key and it’s been a good series for us. The biggest challenge playing in India is to adapt to the conditions and it’s my first series in India, proud of the boys. 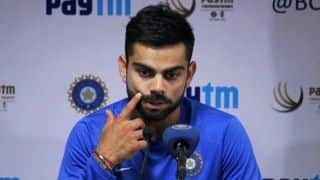