Australian vice-captain and opening bat Alex Carey confirmed the news as reported by The Western Australian.

Allrounder Mitchell Marsh, who missed the first ODI against India due to to a gastro bug, has rejoined the Australia squad ahead of the second ODI at Adelaide, after spending two days in hospital. (2nd ODI Preview: Australia target improvements, India need a win)

Australia’s vice-captain Alex Carey says Marsh has rejoined the ODI squad and will train on Monday to press his claims to play in Tuesday’s game two of the three-match series, the publication s website reported.

Perth Scorchers‘ Aston Turner was called in as cover for the allrounder, however, Turner failed to make to the XI that claimed a 34-run win over India at Sydney.

Marsh, who was axed from the Australia s Test squad alongside brother Shaun, played one Big Bash League game – after the Test series against India – for Perth, scoring 11 runs against Brisbane Heat before falling ill.

Turner, who plays state cricket with Western Australia and for the Scorchers in the BBL, has scored 43 not out, 47 and 60 not out in his past three Big Bash League matches. 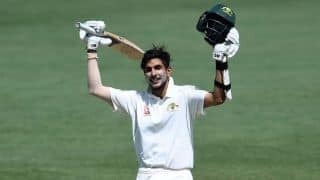