From 8 for 2, India's captain and vice-captain struck crucial half-centuries to guide the total to 172/3 at stumps on Day 2.

The surface of the Optus Stadium in Perth eased out for batting on Saturday and cashing in on the opportunity was India captain Virat Kohli, who remained unbeaten after scoring his 20th Test half-century and guided India patiently to 172/3, in reply to Australia’s first-innings total of 326.

Ajinkya Rahane, continuing his fine form from the previous game, partnered him in an entertaining stand of 85* which saw the Mumbai batsman race to 23 off 22 before settling down to take a more orthodox approach after Mitchell Starc had struck soon after tea to see the back of the in-form Cheteshwar Pujara.

It was almost as if Rahane walked out with an intent to counter attack. After opening his account with a couple followed by a single, Rahane upper cut Pat Cummins for his first boundary. Next over, he pulled Starc down the leg side for another four. The real statement arrived in the left-arm quick’s next, when he was upper-cut, only this time the ball sailing over the third-man fence. In a rare sight, Rahane’s strike-rate read in excess of 100. Once settled, Rahane helped himself to four more boundaries – two consecutive off Hazlewood before reaching his 17th Test fifty.

India’s scoring rate upped in the final session with both batsmen scoring over 100 runs in comparison to 62 in the second.

Kohli walked in with intent and started off with a perfectly timed straight drive to make his intentions clear. The Indian captain, batting outside his crease, went for his shots and even got three boundaries of one Hazlewood over. His brief counterattack forced Australia skipper Tim Paine to bring in Nathan Lyon – in the 14th over – and even though the offspinner found his radar and rhythm right from the first ball he bowled, Kohli and Pujara managed to keep the offspinner’s threat at bay. With Rahane looking composed, Kohli grew in confidence and slashed Cummins towards third man to bring up his half-century.

India began the day on a strong footing, allowing Australia to add just 49 runs for the last four wickets before bringing the innings to a close. Paine and Cummins extended their overnight alliance to 59 before Umesh Yadav and Jasprit Bumrah separated them in the span of three deliveries. The end came not long after, with Ishant Sharma taking two in two to end the innings. But once India were reduced to 8 for 2, Australia would have been quite satisfied with the total.

After India had lost Murali Vijay in the first session – cleaned up by Starc with a peach of a delivery, Hazlewood bettered his partner’s effort early in the second session with a yorker length that moved away late and KL Rahul played all over it to lose his stumps for just two runs. With the conditions overcast, Australian quicks had their tails up, before Kohli and Pujara negated the threat.

Lyon’s first five overs yielded just four runs and Australia applied the squeeze on India’s run rate. Pujara, batting with Kohli, played out 24 deliveries without scoring a run. He finally ran two, which brought up the 50-run stand for the third wicket between him and his captain off 135 balls. But the promising 74-run stand was snapped shortly after tea with Pujara feathering Starc to Paine down leg.

India bowled fairly well in the first hour of the day, but not enough balls hit the stumps and forced the pair to play. Plays and misses meshed with dabs and steers and flicks as 29 runs came from the first hour. Cummins once again displayed a firm technique and some crisp drives. Paine had some close calls too.

The seventh-wicket stand was ended with a top delivery from Umesh. Cummins, on 19, was beaten for movement and lost his off stump on his 66th delivery faced. Two balls later, Paine was rooted to the crease when a full delivery from Bumrah jagged in and had him a goner. The skipper reviewed, but in vain, and was sent on his way for 38 from 89 balls.

Ishant came back for a second spell and had Starc edging to Rishabh Pant, the key once again being the fuller length and a bit of wobble. Next ball, he went fuller and had Hazlewood edging to a diving Pant. Like Shami in Adelaide, Ishant will be on a hat-trick when Australia bat again having taken 4/41, his best figures in Australia. 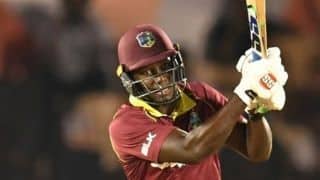 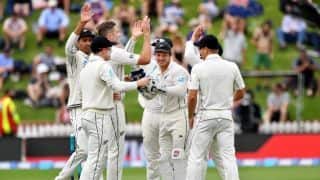