Won't sit back and be walked over if similar situation arises: Paine on exchange with Kohli

Won't sit back and be walked over if similar situation arises: Paine on exchange with Kohli

Paine insisted that he won't sit back and be "walked all over" if faced with a similar situation in the remaining matches.

PERTH: Australia captain Tim Paine on Tuesday played down the verbal showdowns with Virat Kohli during the second Test here but insisted that he won’t sit back and be “walked all over” if faced with a similar situation in the remaining matches.

India lost the second Test Tuesday by 146 runs, allowing Australia to draw level in the four-match series. The third game is scheduled to start December 26 in Melbourne. The two skippers had quite a bit of banter in the middle, to an extent that they almost made physical contact at one point. But Paine shrugged it off, saying that Australia will invite India for a beer in the change rooms as per their team tradition.

“I don’t think we did touch to be honest. It got pretty close. It was a highly competitive Test match from both teams. There’s a lot on the line and both teams desperately want to win and sometimes that stuff happens” Paine said in the post-match press conference. “I love it. I enjoy watching Kohli, I always have. I think he brings out the competitive spirit in a lot of people which is great, and I’m sure it was great to watch.

“I was really proud of the way our team conducted themselves on the field this week. We definitely will (the Indian team for a beer) after the series. That’s always been the thing that has happened and will always be the case.”

But the wicketkeeper-batsman was quick to assert that he won’t back down in the face of a showdown if it happens again.

“I think it’s just one of those things, at times you have got to draw a line and start sticking up for yourself and sticking up for your teammates. We are certainly not going to sit back and be walked all over. Sometimes those things happen and you have to get involved. Was it a decision as a captain to try and assert myself on the game? No. It was just two competitive cricketers trying to do their best to win the game,” he said.

Paine stated that the 112-run stand between Marcus Harris and Aaron Finch was critical in their 146-run win. India folded within 65 minutes on day five.

“…I thought the way Finchy and Marcus Harris played in that first session, to put on 112, looking back now was critical. It allowed us to get a 300-plus score in the first innings.

“From that moment I felt we were always just ahead in the game, and only needing a partnership or a wicket to continually stay in front…and then Nathan Lyon’s bowling in the first innings was, again, unbelievably good,” Paine said.

While India didn’t pick a full-time spinner, Lyon finished Player of the Match with a match haul of eight wickets in the second Test. Paine lauded the spinner and also credited his pace bowling unit that came through for the second Test running.

“…it does seem like Nathan is getting better. I feel like at any stage you can throw him the ball, it doesn’t matter at what end or who is on strike, what time of day it is…even with the bat at the moment. I think his game keeps going to another level. I can feel guys growing in confidence around Nathan and that’s what you want form your senior players,” said Paine.

“In terms of the quicks, I think they’re all going beautifully at the moment, they’ve bowled a lot of overs but we’ve got decent rest and all three of those guys super professional so they will be raring to go.”

When asked if Australia are confident enough of playing an unchanged eleven through the series, Paine said: “I think we will just enjoy this victory first and then obviously later today we will turn our attention to the MCG.

“If it’s the same eleven, then great, but if we have to make some changes I am sure will talk about that at some stage.”

Paine has increasingly drawn praise from former Australian cricketers for the manner in which he is leading the Test side. It helps that this is not only the first Test win under his leadership but also the first since the scathing ball-tampering scandal in South Africa.

“I am relieved, personally. It’s been hard work. The first two Tests of this series have been really, really tough. Both teams have outstanding fast-bowling attacks. It’s been a really bruising Test match to be honest,” he said. “I think we have some really inexperienced players in terms of Test matches played. To get a win like that against the best team in the world is going to give them a huge boost of confidence, no doubt.

“But it means nothing as soon as we get to Melbourne next week at the MCG. It’s going to be on again from ball one so we have to maintain that intensity and match India in that area. If we do, we are going to be right in the fight again.” 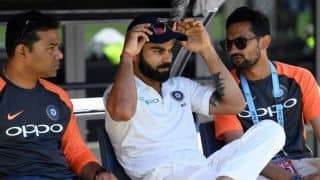