Cheteshwar Pujara shone with a terrific unbeaten hundred on a day of attrition cricket, with Australia still ahead of India by 91 runs in the ongoing third Test at Ranchi.

Cheteshwar Pujara shone with a terrific unbeaten hundred on a day of attritional cricket, with Australia still ahead of India by 91 runs in the first innings of the ongoing third Test at Ranchi. Resuming at 10 not out on Day Three, Pujara ended at an unbeaten 130, facing 328 balls in the process and taking his side closer to Australia s 451. However, yet another ordinary display from the Indian middle-order has kept the contest open, as Australia are still ahead by a considerable margin. At stumps, Pujara was accompanied by Wriddhiman Saha (18). For Australia, it was Pat Cummins being the pick among the Australian bowlers with 4 for 59.

On a day when big Indian guns such as Virat Kohli and Ajinkya Rahane added 20 runs combined, while Pujara dropped the anchor and produced one of his finest Test innings. Pujara s game as well as fitness is modelled for such days, and the Indian No. 3 relished the opportunity for extending his dominating run in this home season, wherein he already has amassed more than 1,100 runs. On Saturday, batting for long hours was of equal importance as it was to make runs, and Pujara ticked every bracket right.

Pujara added 102 runs with Murali Vijay (82), 32 runs with Virat Kohli (6), 51 runs with Ajinkya Rahane (14), and another 44 runs with Karun Nair (23). Along with Saha, for the seventh wicket, Pujara has so far added 32 runs, but most importantly, bringing down Australia s lead into double digits.

If Pujara s marathon innings is taken out of the India s output on Day Three, the world No. 1 team would find itself far off from the promise it carries.

India began sedately, rather slowly as they trailed Australia by 331 runs on the third day’s morning. The first hour saw only 24 runs being scored, but towards the end of the first session, there was a sudden rush for runs which saw Murali Vijay falling for 82. The opener batted extremely well: his sweep shots were convincing and the rotation of strike in the second half of the morning session got him a lot of runs.

But he fell at the stroke of lunch, trying to hit Steve O Keefe for another big shot. The bowler eventually got the better of him. The batsman was cramped for room, and he threw his wicket only after he had put up a century stand yet again with Pujara.

Out of desperation, when Australia wasted a DRS review second on the trot Kohli emerged from the air-conditioned confines of the dressing room to rub it in.

The master had primed himself up for a comeback.

However, 23 balls and 6 runs later, Kohli edged one straight to, of all the fielders, Steven Smith. Peter Handscomb was quick to get around his captain when the edge off Cummins delivery carried straight into the hands.

During the tea break, the hosts broadcaster got VVS Laxman and Aakash Chopra to lambast Smith and Glenn Maxwell who did indulge himself in some banter after making a Kohli-like dive for mocking the Indian captain over his shoulder injury. Later, it emerged that it was Handscomb s hand spotted over Smith s shoulder in a specific TV frame.

Kohli, thus, lived yet another day in this India-Australia series dominating the news neither for his captaincy nor for the mountainous runs he makes. For what it is worth, Kohli s scores now read 0, 12, 13, 15 and 6 in the ongoing series.

Rahane threw it away as well when he tried unleashing an upper-cut on a short delivery which could have been a wide if left alone. Cummins had bounced out yet another Indian batsman. There was one more such dismissal later in the day.

Pujara watched in anguish as Rahane tried an upper cut and fell, and shortly, Karun Nair s defence was breached again. Josh Hazlewood rarely gives any room, and it takes a special effort to keep him out of contention. This time, he skit one through Nair s defence to knock over his off-stump.

Ravichandran Ashwin survived a probing spell from Pat Cummins as Australia pulled things back in control towards the end of the day. In the first hour of the final session, India got a mere 23 runs and lost one wicket. The final hour was slightly different with Wriddhiman Saha scoring 20 not out, bringing down Australia s lead to 91.

For Australia, it was an exhausting day on the field, but they will be pleased with the disciplined shown by their bowlers. India were made to work hard for each run, and Cummins showed a lot of skills in snaffling 4 wickets. 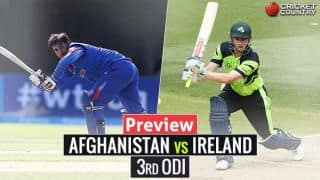 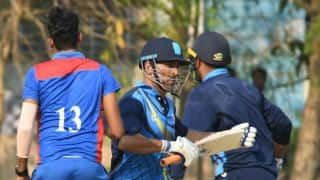