There have been some emerging talents who have propelled both the teams to reach the final.

India will hope to continue their unbeaten run in the 2018 U-19 World Cup final when they take on Australia at Bay Oval in Mount Maunganui on Saturday. Both teams have won the U-19 World Cup title thrice. To set up a date in the final, Australia beat Afghanistan by 6 wickets while India thrashed Pakistan by 203 runs in their respective semi-final. India faced Australia at the beginning of the tournament and won by 100 runs. It is also a trip down the memory lane as Unmukt Chand-led India had won their third U-19 World Cup title in 2012, defeating Australia by 6 wickets at Townsville.

Back to 2018, there have been some emerging talents who have propelled both the teams to reach this stage. Here are the top 5 players to watch out for ahead of the much-awaited final:

Shubman Gill: Gill has been in fantastic form throughout the tournament. His scores of 63, 90*, 86 and 102* against Pakistan in the semi-final speaks volume of this promising talent. Gill has 341 runs from 5 matches at 170.50 so far in the World Cup. He also averages over 100 from 15 ODIs at Under-19 level. Gill will be expected continue his form and guide India to their fourth World Cup title. In a span of three months, he would also be seen donning the Kolkata Knight Riders (KKR) jersey.

Lloyd Pope: Before the tournament started, Pope had told ICC in an interview, I would like to take a wicket I reckon, just one wicket; that would be so good. Today, Pope holds the best bowling figures in U-19 World Cup history of 8 for 35 that destroyed England.

(Trivia: The best figures in Under-19 ODIs belong to IrfanPathan. He registered figures of 9 for 16 against Bangladesh at Lahore in 2003)

The 18-year-old leg-spinner has 11 wickets from 4 matches at 11.09. India would need to be wary of the next Shane Warne in the making.

Anukul Roy: The all-rounder has been the wrecker-in-chief in the ongoing World Cup. He currently holds 12 wickets from 5 matches at 7.91. Anukul claimed his maiden five-wicket haul when he routed PNG for 64.Anukul was good with the bat against Pakistan as he stitched a vital stand with Gill. Anukul s consistency will hold the key.

Jack Edwards: The youngest member of Australia U-19 squad, Edwards was born in April, 2000.He was the only survival element against India in the opening match. He was the top-scorer and also ended with 4 for 65 restricting India s innings to 328 for 7. Last year, he acted as the catalyst in NSW Metro s victory in U-19 Championships final.

In the World Cup, he has smashed 2 fifties and taken 5 wickets from 4 matches. If need be, Edwards could change the script of the match with his all-round skills.

Shivam Mavi: He has been a great support to Anukul in the tournament. His bowling deliveries have left the opponent batsmen reeling. Mavi has provided early breakthroughs to India and presently has 8 wickets from 5 matches at 15.50. His best spell in the World Cup came against Australia where he ended with figures of 3 for 45. He would also be joining Gill in the KKR camp after the World Cup.

Mavi s express pace has been the amongst the top talks this U-19 World Cup. 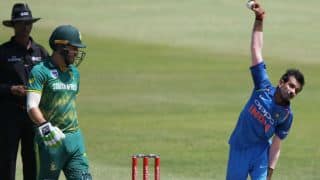