Such is Mithali Raj’s swag that she shimmied down the track and muscled it to sight screen to become the first to score 6,000 runs in women’s ODI cricket. A few deliveries before, she had surpassed the previous highest run-getter Charlotte Edwards, taking 16 innings fewer to attain the feat. Meanwhile, Poonam Raut continued her brilliance and compiled her second ODI hundred. Riding on the duo’s endurance, India posted 226 for 7 against defending champions Australia at Bristol.

India lost Smriti Mandhana in the fourth over. Trying to scythe an off-break, she found no room and edged it behind the wicket. This was Mandhana’s fourth consecutive failure following her staggering innings against England (90) and West Indies (106*).

Barring the opening game against England, India had sent Deepti Sharma at No. 3 to maintain the left-right combinations. This time, however, Mithali held Deepti back and took crease. The decision paid off, as Raut and Mithali added 157 runs for the second wicket.

India adhered to old-fashioned cricket. Sticking to basics, they played everything down the ground and gave no chance for the Australians to exploit.

Raut has had scores of 86, 0, 47, 16, and 22 in this tournament, often laying foundation. With Mithali on strike, Australia overlooked the diminutive opener’s presence and why not. Also given the fact that taking aerial route is not her best suit, Australia kept her on leash. However, counterattack came from the unlikeliest of source: she heaved one to wide long-on, and that was the first sign of appetite for quick runs.

The track was a tad on the slower side. India had no option but to pin deep in the crease and play the ball as late as possible.

For the lazy elegance she is known for, Raut mostly tried to play past backward-point. When pitched on leg, she tried to play it fine. Well, she even executed a paddle-sweep to conviction, so much so that you could see the Sachin Tendulkar finesse painted on it. Against spinners, she often swept and how.

Mithali, evergreen as ever, got behind the line of the ball and dealt it from there. Although that six to notch up 6,000 runs was a spectacular one, the cover-drive she played was the highlight of her innings: she half-leaned with her front leg half-locked and her back leg perfectly planted in the crease, with the elbow as high as possible…

India entered the death overs 164 on the scoreboard, and Mithali decided to drop anchor. However, all she could do was hit it straight back to the bowler Kristen Beam.

After bringing up her first century in World Cup, Raut perished while going for the big shot.

In came the talismanic Harmanpreet Kaur and hoicked one over deep mid-wicket, but that was it: India went on to lose 7 wickets for 226 runs in 50 overs. They could never execute the late flourish: Veda Krishnamurthy was run out; Sushma Verma was bowled (after running a hilarious one-short); Harmanpreet induced an edge; Jhulan Goswami played an ugly heave. Australia, to put things into perspective, staged a comeback in the death. 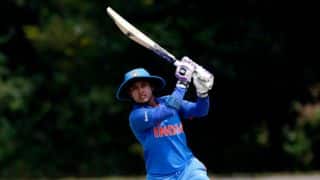