In the recent intra-squad practice match at Dubai, Shaun Marsh scored 62 as an opener.

Australia’s coach for the T20I series against Sri Lanka, Justin Langer has backed the inclusion of Shaun Marsh in the squad for the upcoming India tour but with some caution. In the recent intra-squad practice match at Dubai, Marsh scored 62 as an opener. However, Langer wants the southpaw to move down the order at No. 6. Marsh has scored two centuries playing in the top-order that came against Sri Lanka in two separate tours. Marsh has not played the longest format since the first Test against South Africa in November last year. Following a finger injury, he was ruled out for the remainder series at home. He had scored 63 in the second innings of the first Test against South Africa with a broken finger.

Speaking to AAP, Langer said, It depends on which balance they go for, how Australia wants to line up. If they go the traditional XI you’d pick Shaun because of his record in not only the subcontinent but for Australia. He deserves to play, Shaun deserves to play in the Test match. Even before his injury, he deserved to play. After the West Indies Test in 2015, Marsh was dropped with the return of Usman Khawaja from injury. But the competition for No. 6 position gets intense as all-rounder Glenn Maxwell has put his hand up saying, I d certainly like to be the No.6, in all countries. It’d be a great position for me to try and nail down and that’s something I’m hoping to do, starting in India.

Australia face a selection conundrum for the opening slot with Marsh facing fierce contest against Matt Renshaw. But if Australia opt to fill the middle-order with Marsh, they might go ahead with four bowlers in that scenario. Ashton Agar is also in contention after his impressive innings during the intra-squad practice match picking 4 wickets and hitting 74. FULL CRICKET SCORECARD: India vs Australia, 1st Test at Pune

Australia s interim chairman of selectors Trevor Hohns had said while announcing the touring party for India, Shaun (Marsh) is proven in subcontinent conditions and is coming off a hundred in his last Test match in Sri Lanka. He is a very versatile batsman who can slot in at the top or the middle of the order. India vs Australia: Mitchell Starc hopeful of extracting swing with SG ball

Australia s tour of India starts February 23 with the first Test slated for Pune. Australia will arrive in India on Monday, and will play a three-day tour match in Mumbai before heading to Pune for the opening Test.

The second Test of the series will be played at Bengaluru from March 4-8, while the third will be at Ranchi from March 16-20. The fourth and final Test will be at Dharamsala from March 25-29, 2017. 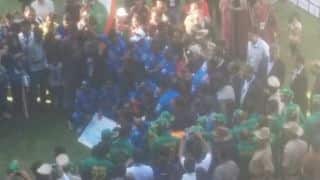