“I am a little surprised with the magnitude of the criticism that has come to him, said Kohli, as quoted by cricket.com.au. (ALSO READ: Rattled Australia pick through rubble of lost summer against India)

“He is a very skilful bowler. He has got the right mindset. “He has been your No.1 bowler for years now. If he is your best bowler, you give him space to work things out and not mount more pressure on him. Because you don t want to lose a guy like that who is so skilled and wins games,” Kohli added bout his former Royal Challengers Bangalore teammate. (ALSO READ: Don t think we have given enough credit to India s bowlers: Tim Paine)

Starc has come under fire from former Australia cricketers for his form over the past year. Even though he has taken 13 wickets in four Tests against India, his average is 34.53.

“When he’s at his best he’s brilliant. When’s he not so much, but again he’s not running out trying to spray the ball everywhere,” Paine said. “That’s what I don’t get with the criticism he’s getting. Mitchell Starc is trying his absolute best to do the same thing he did a year ago when he was swinging the ball around corners.

“He’s down on confidence a little bit and I sometimes think people forget that he’s just a bloke who’s trying his best. I know he’s playing at the highest level and they expect a lot from him, but it doesn’t always work; it’s Test cricket, he’s coming up against some very, very good batters and he’s not quite at his best,” he added. 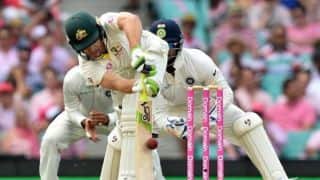 Rattled Australia pick through rubble of 'lost summer' against India