Matt Renshaw, the 20-year-old England-born Australian cricketer is busy preparing to open the batting for Australia in the first Test against India.

Matt Renshaw, the 20-year-old England-born Australian cricketer is busy preparing to open the batting for Australia in the first Test against India. It will be overwhelming for any cricketer to play Test cricket in one of the most populous countries of the world. But Renshaw definitely isn’t one among them. Renshaw agrees that it is quite different than playing in his hometown, Brisbane. Even though, Matt Renshaw and Usman Khawaja are locked in a tight selection showdown for the final top-order spot in the Australian Test squad against India but still, Renshaw has an edge over Khawaja. FULL CRICKET SCORECARD: India vs Australia, 1st Test at Pune

Speaking about the experience of playing in India, Renshaw says that it will be completely new experience for him. He wants to embrace, enjoy and explore the different culture. He says he loves the sport a lot but it was completely unexpected for him to play in India.

“It’s a lot different to hometown Brisbane. I’ve just got to embrace it and try and get out and have a look and just explore. It is a completely different culture. I’ve just been trying to enjoy it. I’m 20 years old, I’m doing what I love for my country and it’s something that really excites me … I wasn’t expecting to be here at this point in time,” Renshaw said in report from AAP.

Though, Renshaw failed to fire in Australia’s only game tour before the Pune Test series, it is expected that he will extend his opening partnership with David Warner. The two of them have been practicing in the nets, since their arrival in Mumbai, India. They are also busy discussing the threats that Indian bowlers can pose to Australian batsmen on the spin-friendly pitches. Their mantra is to devise a plan and try to stick to it.

“He’s been really good. Helping me and just discussing plans … (Warner’s advice was) when you have a plan, try and stick to it. We’ve both been throwing back ideas to each other,” he added.

Renshaw had some good advices from former Australian player, Matthew Hayden in a pre-tour chat. Hayden has shaped Renshaw’s approach in dealing with star spinners like Ravichandran Ashwin and Ravindra Jadeja.

Renshaw wants to use the sweep shot as Hayden had successfully used it in the past. Although he is not sure if it might come out in the game, but he still wants to use it as an option.

The first Test begins on Thursday and this will probably be the toughest game that Renshaw has been a part of. 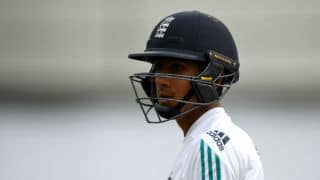 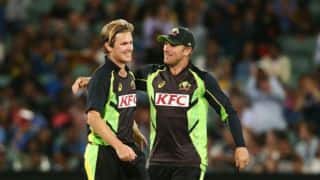