Peter Siddle said that he was amazed to see spinner Adam Zampa bowling only 2 overs during Australia's World T20 defeat against India.

Johannesburg: Indirectly questioning Steven Smith‘s captaincy, Australian fast bowler Peter Siddle has said that he was amazed to see spinner Adam Zampa bowling only two overs during their World T20 defeat at the hands of hosts India. The 23-year-old had been one of the Aussies’ more effective bowlers during the tournament and Siddle believes that Steve’s decision to drop him for two overs went against them and resulted in their early exit from the T20 format’s pinnacle tournament. Siddle said that he was extremely disappointed to see Zampa bowling for only two overs, insisting that he had shown how capable he is of taking wickets when given the opportunity, Sport24 reported. FULL CRICKET SCORECARD: India vs Australia, Match 31, ICC World T20 2016 at Mohali

Pace spearhead Mitchell Starc, who missed the tournament after having ankle surgery, also expressed surprise over the matter. Pointing out that Zampa bowled pretty well in Australia’s previous two matches, Starc said Smith had always been good in rotating his bowlers, but believes that it would be great if he had used the leg-spinner in those extra two overs.

Meanwhile, Australia coach Darren Lehmann believes that hosts India will lift the coveted World Twenty20 title for a second time after they ended the Steve Smith-led side’s hopes of making it to the semifinals on Sunday. Star batsman Virat Kohli smacked an unbeaten 82 as India defeated Australia by six wickets in a tense quasi quarterfinal clash in Mohali to set up a semifinal showdown against West Indies in Mumbai on Thursday. “I can’t see them losing, that’s my personal opinion,” Lehmann was quoted as saying by the Sydney Morning Herald. 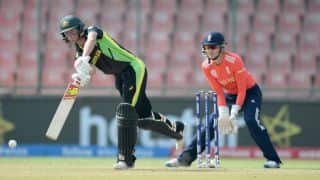