Mohali: Australia skipper Steven Smith said his team was in a winning position before an unbelievable innings from Virat Kohli took the game away from them in their must-win ICC World T20 match, here. “It was a pretty serious innings on wicket which was tough to bat on. I thought we were in a good position with India needing two runs a ball at one stage. It just took an unbelievable innings under pressure by Virat Kohli to get his team over the line. It looked whatever Virat did at that point would go to the boundary. It was a serious innings. Hats off,” said Smith after the six-wicket loss to India in the virtual quarterfinal at the I S Bindra Stadium here Sunday night. FULL CRICKET SCORECARD: India vs Australia, Super 10 Group 2, Match 31 at Mohali

Kohli keeps on winning games after games for India and it was no surprise that Smith was asked to compare the star player with Sachin Tendulkar. “I think they are two different players. Virat is an extremely talented, very good player. He has been for a long time. You have to see it how he played today. He times his chase to perfection. He averages more than 60 while chasing, which is quite remarkable. I think he is a perfect example of that you can succeed by playing orthodox strokes in this format. He has got incredible wrists which is a great skill in this format. Hats off to him,” the Australian captain said. 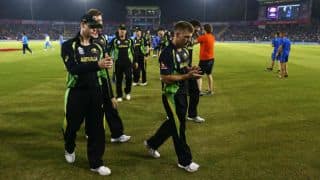