India vs Australia: When Matthew Wade asked Ravindra Jadeja the meaning of a Hindi slang

India vs Australia: When Matthew Wade asked Ravindra Jadeja the meaning of a Hindi slang

I don t know, you ll have to ask somebody. Jadeja further said, I didn t use it on you and I don t know. But despite this Wade persisted with his curiosity by asking, Does it mean Hello?

Tensions always run high when India and Australia lock horns irrespective of the format. The ongoing Border-Gavaskar Trophy 2016-17 has not been any exception to this. Right from the first Test, players from both teams have been involved in various altercations. But on Day Three of the last Test at Dharamsala, something unexpected and funny was witnessed. Ravindra Jadeja was in a classy touch with the bat, hammering Australian bowlers scoring his 7th Test fifty and Australia had no answers to his assault. Wicketkeeper Matthew Wade tried instigating Jadeja by taunting the left-handed ace all-rounder. This is when things got a little heated up and a not-at-all expected conversation was caught in the stump-mic. FULL CRICKET SCORECARD: India vs Australia, 4th Test at Dharamsala

The incident happened soon after Jadeja got to his fifty. The left-handed batsman was peppered a lot by Wade and his skipper Steven Smith throughout the first session. It was during his usual sword style celebration that Jadeja mouthed a commonly used Hindi slang which caught the ears of the Australia keeper Wade. This compelled Wade to ask Jadeja its meaning. But the Indian all-rounder handled the situation well and said, I don t know, you ll have to ask somebody. Jadeja further said, I didn t use it on you and I don t know. But despite this Wade persisted with his curiosity by asking, Does it mean Hello?

It was then umpire Ian Gould interrupted from the other end saying, Hello, let s play cricket , putting an end to this unexpected conversation.

Well things do get heated up but what intrigues is how and why this all happened. The answer to this is initial period of the first session.

As Jadeja was playing the Australian bowlers comfortably, Wade, praised Nathan Lyon drawing comparisons between Lyon and Jadeja. He said, Very good in all conditions, Gary (Lyon). Great in all conditions, Gary. You get wickets all over the world, mate. You’re not just a one-trick pony. Wade continued to taunt Jadeja, saying: I m going to get a selfie with him at the end of the game. Put it on instagram, as soon as the game finishes.

Umpire Marais Erasmus had to step in, at one point, asking Wade to end the sledging: Wade, are you going to stop that? However, Wade continued mouthing Careful with that sword too.

But the warrior that Jadeja is bashed the bowlers with ease and comfort and gave it back to Wade saying, I don t understand why the Australian selectors pick you for Tests. You don t deserve it.

Amidst all this, Jadeja scored 1,000th run in Test cricket becoming the 10th player in the history of Indian cricket, to score 1,000 runs and pick up 100 Test wickets.

And to top this all, Jadeja gave a befitting reply to this whole incident in the post-match press conference. He was asked by the reporters to shed some light on the whole banter. To which he said, Ye sab toh hote reheta hai game main. Bas yehi discuss kiya ke jab game har jaoge toh khana-peena karenge ek saath. (These all things do keep happening in the game. We just discussed that when they (Australia) lose the game, we will have food together) 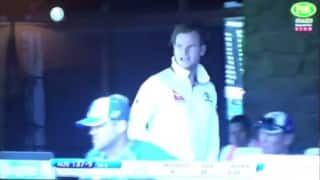