Australia's spinners have not done well in India and the 23-year-old Mitchell Swepson said he is waiting for an opportunity to take up the challenge.

Emerging Australian spinner Mitchell Swepson says he will not get intimidated by the aura of Virat Kohli and employ an aggressive approach against the India skipper if he gets an opportunity to bowl during the four-Test series starting on February 23. Kohli today blasted a 246-ball 204 against Bangladesh at Hyderabad to become the first batsman in history to post double centuries in four consecutive Test series but Swepson said he will not get intimidated by the Indian. Australia will start their tour of India with the first Test scheduled to be hosted by Pune on February 23. Smith: Success in India will make Australia ‘one of the all-time greats

“Especially as a leg-spinner you’ve got to look to be aggressive and take wickets. It doesn’t matter who you come up against. You’re a leg-spinner and you’re going to get hit for runs. So at the time you’ve got to be the wicket-taker and you’ve got to get the breakthrough the team needs. It’s a good point Sammy (Samuel Badree) has made, you can’t take a step back and let them dictate the game. You’ve got to be on the front foot and be aggressive and try and get the wickets before they get you and before they get settled. It’s a good mentality to take over there”, The Daily Telegraph quoted Swepson saying.

“It’s hard not to respect what he’s done, especially on home soil over there and it’s hard not to think ‘this is Virat Kohli, he’s probably the best player in the world at the moment. But at the other end of the spectrum you can almost think of it like, ‘it’s just another player and I’m just bowling another ball to another player and any ball can get any batsman out on the day’. It’s about blocking out the negatives and seeing that you can potentially get a breakthrough for your team. That’s all that matters”, said Swepson.

Australia‘s spinners have not done well in India and the 23-year-old Swepson said he is waiting for an opportunity to take up the challenge of taming the Indians.

“We’ve taken four spinners over and I think in some ways the Australian camp (is looking at it like) we’re going to take a lot of wickets with spin, so there’s a bit of pressure in that sense. The spinners (need to) take the majority of wickets. It’s going to be a massive challenge and I think any cricketer wants to challenge themselves, and that’s certainly my theory. I can’t wait to get that opportunity”, concluded Swepson. 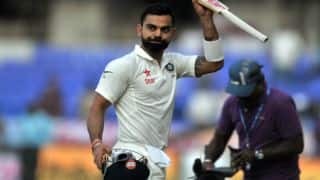