India vs Australia 2020: Thanks to his gritty knock, Wriddhiman Saha became one of the top trends on Twitter with fans praising the veteran. Wriddhiman Saha struck what turned out to be a match-saving half-century on the third and final day of the first warm-up match between India A and Australia A in Sydney on Tuesday. Saha, who registered a duck in the first innings, struck an unbeaten 54 after the visitors were left struggling at one stage.

Thanks to an unbeaten century from Cameron Green A had declared their innings at 306/9 with an overall lead of 59 runs. India A openers, who were sent back cheaply in the first dig on Sunday, started well but couldn’t convert the starts.

Prithvi Shaw struck 19 off 31 before departing in the seventh over before Cheteshwar Pujara registered an eight-ball duck. Shubman Gill had raced to 29 off 24 when he fell to Green.

Hanuma Vihari (28) and captain Ajinkya Rahane (28) then joined hands to stabilise the stuttering innings but their departures resulted in a slide that saw the tourists slipping to 143/9.

However, Saha stayed put and kept finding boundaries and found some support from No. 11 Kartik Tyagi who helped his senior teammate complete a well-deserved half-century.

Thanks to his gritty knock, Saha became one of the top trends on Twitter with fans praising the veteran.

Indians declare at 189/9 against Australia A after securing a 130-run lead. pic.twitter.com/aKiGSwR2Z0

Wriddhiman Saha showing resilience! Top-order can learn from him. #AUSAvIND

Wriddhiman Saha saves us from Embarrassment.

Wriddhiman Saha showing his class and scored excellent fifty and India declared his 189/9 and lead is 130 runs. Saha and Tyagi added 46 runs for the 10th Wickets. #INDAvsAUSA pic.twitter.com/i3qmgYNCrv

India A declares at 189/9 after a great fifty from Wriddhiman Saha and couple of contribution from Shubman Gill, Hanuma Vihari and Ajinkya Rahane. Mark Steketee picked a fifer, he bowled outstandingly. Australia A needs 131 to win the practice game in 15 overs.

Excellent fifty under pressure from Wriddhiman Saha. Playing amazing hand with Kartik Tyagi on crease, he’s scored majority of the runs in the final wicket. pic.twitter.com/cZ2j0foIgi

Saha struck seven boundaries during his innings as India declared at 189/9, setting Australia A 131 runs to win.

Australia eventually managed 52/1 in 15 overs as the match ended in a draw. 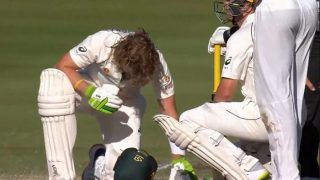 India A vs Australia A: Test Hopeful Will Pucovski Walks Off The Field After Blow to Helmet | Watch Video