Neither team has ever played a day-night Test before but Domingo is excited by the very idea of both teams beginning a new era.

India‘s inexperience of playing with the pink ball may work in Bangladesh‘s favour when the two teams face each other in Kolkata’s day-night Test starting November 22, believes touring team’s head coach Russell Domingo. Neither team has ever played a day-night Test before but Domingo is excited by the very idea of both teams beginning a new era.

The first-ever day-night Test was played between Australia and New Zealand at the Adelaide Oval in November 2015 and even though 13 more have taken place since, India have always refrained from playing with the pink ball under lights. BCCI president Sourav Ganguly had mentioned how conducting a D/N Test in India was on his agenda and the former captain made his first big decision when the board announced on Tuesday that the second of the two Tests between India and Bangladesh would be played under floodlights at Kolkata’s Eden Gardens.

“We know India is a good Test team. Probably they are the number one team in the world, but there will be uncertainty among players of both the teams of playing a pink ball Test. Both teams don’t quite know what to expect, so it could work in our advantage, could work in our favour.”

Bangladesh last toured India in February 2017 for a one-off Test match which Virat Kohli’s team won emphatically by 208 runs in Hyderabad. Less than three years later, the two teams will come face-to-face again, only this time under floodlights and operating with a pink ball.

“It’s going to be a great occasion under lights in Kolkata against one of the best team of all formats. So we’re really looking forward to the challenge. For sure there will be challenges because we’re not going to have a lot of time to prepare with a pink ball,” Domingo said.

“It’ll be the same for both the teams, not a lot of preparation time, but an exciting event. It’s new for both of the teams, so it can get the teams a little bit closer. And just the way the game is going, we’ve got to look at trying new things at certain times. Like I said, we haven’t done much of it, but sometimes change is the best thing.”

That said, Domingo admitted that there were a few concerns when the announcement was made due to Bangladesh’s lack of time for preparation. But Domingo, during his tenure with South Africa, helped in the team’s preparation for two D/N Tests against Australia in Adelaide in November 2016 and against Zimbabwe in December 2017 at Port Elizabeth and knows what it’s like to get a team up and running for the rigours of a day-night Test.

“I’ve spoken to the players. For sure there were some concerns. Some guys actually said ‘we don’t know what to expect. A little bit of preparation is needed, there will be only two-three days between the first and the second Test. How much time are we going to have to get used to it?”

“(But) during my time with South Africa, we played a pink ball match in Adelaide. We had a warm-up game before that with a pink ball, we had a few sessions. It’s a little bit less time this time for India,” he said. 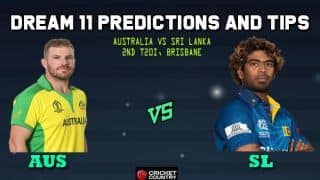