India vs Bangladesh 2019: You Have To Be Mentally Far More Stronger When Playing Against World's Number One Test Team: Mominul Haque

India vs Bangladesh 2019: You Have To Be Mentally Far More Stronger When Playing Against World's Number On

Bangladesh were shot out for 150 after opting to bat with Ishant Sharma, Mohammed Shami and Umesh Yadav sharing seven wickets among themselves. More than lack of practice, mental strength was a problem for Bangladesh, feels skipper Mominul Haque after they were flattened by the Indian pace battery on Day 1 of the first test here on Thursday.

Bangladesh were shot out for 150 after opting to bat with Ishant Sharma, Mohammed Shami and Umesh Yadav sharing seven wickets among themselves. India, in reply, put up 86/1 on the board, at stumps.

“The wicket wasn’t unplayable at all or else myself or Mushfiqur (Rahim) wouldn’t have scored the runs that we scored. The problem is that when you are playing the world’s No. 1 Test team, you have to be mentally far more stronger,” Mominul said at the end of the day’s play.

Mominul chose to bat first, a decision which backfired big time as the pitch helped pacers. The young skipper, thrown to lead the side after Shakib Al Hasan was banned, defended his decision.

“If we had started well, the question wouldn’t have been asked in first place,” he said.

On preparations not being ideal ahead of the tour with players calling a strike and Shakib getting suspended by ICC for not reporting match fixing approaches, Mominul said: “Personally, I have played nine first-class games in the last five months and that’s good enough preparation.

“Yes, what is different is the quality of bowling that we are facing.

“Obviously, at the international level, it will go up by a few notches. But then you don’t expect bowlers to bowl at 120 or 130 clicks at this level. It is a 100 percent mental thing.”

India, who dominated proceedings on the first day, trail by just 64 runs with nine wickets in hand. 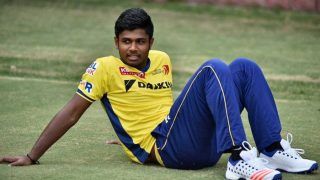 Dream11 Team Prediction KER vs RJS: Captain And Vice Captain For Today Group B, Round 6, Syed Mushtaq Ali Trophy 2019 Between Kerala vs Rajasthan at Greenfield Stadium in Thiruvananthapuram 9:00 AM IST November 15