Deepak Chahar is chuffed at his record show in the series deciding third and final T20I between India and Bangladesh in Nagpur on Sunday. 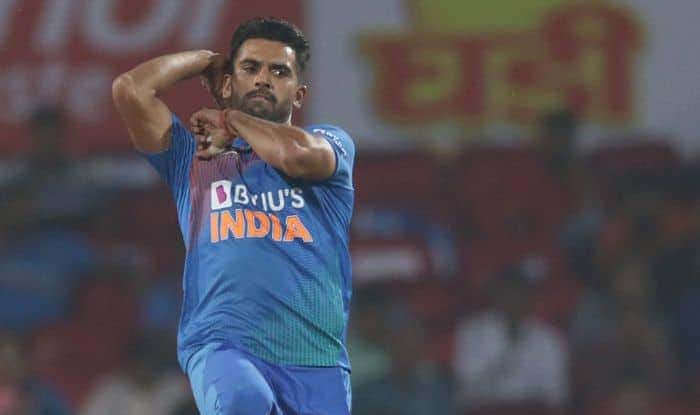 Deepak Chahar is chuffed at his record show in the series deciding third and final T20I between India and Bangladesh in Nagpur on Sunday. It was a night Chahar will never forget as his game-changing show with the ball brought India back in a game that was rapidly slipping away.

Defending 174 at the Vidarbha Cricket Association Stadium, Indian bowlers were struggling after Chahar had given Bangladesh two early jolts in the third over of the innings. Having lost Liton Das and Soumya Sarkar cheaply, the tourists were revived thanks to a blazing half-century from Mohammad Naim who combined with Mohammad Mithun for third-wicket partnership that took them to 110/2 in 12.5 overs.

The equation was 69 from 48 deliveries when Chahar began the 13th over. He then broke the partnership between Naim and Mithun by removing the latter on 27. The stand was worth 98 and the 27-year-old’s figures read: 2-0-3-3

In the following over, Shivam Dube cleaned up Mushfiqur Rahim for a first-ball duck and Bangladesh were suddenly 110/4. The scenario changed completely when Dube also got rid of Naim on 81 in the 16th over.

Bangladesh’s innings fell apart and Chahar picked the final three wickets off successive deliveries to become the first India bowler to claim a T20I hat-trick with Bangladesh being bowled out for 144 in 19.2 overs.

And there was a small matter of the pacer also claiming the best-ever figures in the format – 6/7, surpassing the previous one set by Ajantha Mendis (6/8) of Sri Lanka.

I never thought of this, not even in my dreams,” Chahar said at the post-match presentation. I have been trying to work hard since my childhood and my efforts have paid off.”

Chahar is known more for his swing but on Sunday, he bowled just one over in the Powerplay. He bowled two spells of one-over each before being brought back in the death-overs.

Explaining the strategy, he said, “The plan was that I would get the responsibility of bowling the main overs. Usually I bowl with the new ball, but Rohit bhai said I’ll bowl the crucial overs today, whenever the team needed me to bowl. I’m happy that the management gave me this responsibility on this stage.”

Chahar, who has played one ODI and seven T20Is, will hope this is just the start of something special.