India vs Bangladesh, Delhi T20I : Pollution is not an issue for me: Mushfiqur Rahim after Bangladesh beat India

India vs Bangladesh, Delhi T20I : Pollution is not an issue for me: Mushfiqur Rahim after Bangladesh beat

Mushfiqur made 60 to anchor Bangladesh's chase of 149 as the tourists achieved their target with three balls to spare. They won by seven wickets to lead the three-match series 1-0.

Mushfiqur Rahim Sunday said pollution did not bother him after his unbeaten half-century powered Bangladesh to their first-ever Twenty20 international victory over India in smog-hit New Delhi.

Mushfiqur made 60 to anchor Bangladesh’s chase of 149 as the tourists achieved their target with three balls to spare. They won by seven wickets to lead the three-match series 1-0.

The Indian capital has been blanketed by smog with authorities saying air pollution had reached “emergency” levels, with schools closed and other restrictions imposed.

But it was business as usual at Delhi’s Feroz Shah Kotla ground with Bangladesh restricting the hosts to 148 for six after electing to bowl first.

The tourists, who had trained in masks for the opening game of their tour, were in trouble at 54-2 when Soumya Sarkar, who made 39, and Mushfiqur put on a crucial 60-run stand for the third wicket.

“Pollution is not an issue for me. I was more concerned about facing the opposition bowlers than worry about pollution,” Mushfiqur, who scored his fifth T20 fifty, told reporters.

“Irrespective of the condition we had to play. Since the moment we arrived in India it was like this and we did cope up with the weather and performed on match day.”

The newly-elected president of the Board of Control for Cricket in India (BCCI) Sourav Ganguly thanked the teams for braving the extreme conditions and putting up a good show.

“Thank u to both the teams to play this game @ImRo45 @BCBtigers under tough conditions .. well done bangladesh,” the former India captain wrote on Twitter.

Soumya was bowled by paceman Khaleel Ahmed but Mushfiqur survived a dropped chance at 38 to hit four consecutive boundaries off Ahmed to put Bangladesh ahead.

Skipper Mahmudullah Riyad joined Mushfiqur at the crease and brought up the win with a six off debutant all-rounder Shivam Dube. He made an unbeaten 15.

Bowlers Shafiul Islam and Aminul Islam claimed two wickets each to play a key part in Bangladesh winning their first T20 against India in nine attempts.

India lost early wickets including skipper Rohit Sharma who was trapped leg before wicket for nine off Shafiul in the first over of the innings.

Aminul then struck twice to rattle the opposition top-order with KL Rahul, who made 15, and Shreyas Iyer, who scored 22, letting go of their starts.

Opening batsman Shikhar Dhawan made 41 with three sixes but returned to the pavilion after being run out as India slumped further.

Pollution levels turned hazardous during the past week, putting the match in danger of being called off, but the BCCI felt it was too late to change the venue.

The reading for pollutants in the atmosphere hit 810 micrograms per cubic metre Sunday morning, beyond the “hazardous” zone according to the US embassy in Delhi, which independently monitors pollution levels.

Cricket-crazy fans seemed to have ignored health warnings from government agencies as a near-capacity crowd turned out to watch the first match of the series.

In December 2017, two players from Sri Lanka fell ill on the pitch because of smog and play in the Test match was briefly suspended.

Every winter, the megacity of 20 million people is blanketed by a poisonous smog of car fumes, industrial emissions, and smoke from stubble burning at farms in neighbouring states. 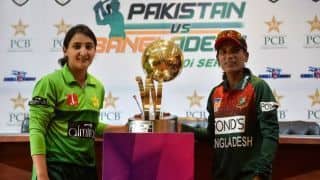