India vs Bangladesh T20I Nidahas Trophy 2018 Final Live Streaming, Live Coverage on TV: When and Where to

The live coverage of the match will be shown on Discovery s sports channel, DSport in India in English.

The young Indian team led by Rohit Sharma have come back strongly after facing defeat in the opening game of the Nidahas Trophy 2018. Bangladesh on the other hand have surprised everyone with their performance in the tournament as they defeated the host in both the matches. The final will also be played at R Premadasa in Colombo. You can catch the live blog HERE.

Shakib Al Hasan with all the drama in the previous match will have to mind his actions in the big final. Mushfiqur Rahim has been in tremendous form in the series, whereas Mahmudullah has found form at the right time. Mushfiqur played a vital hand in the record breaking chase of 215 runs against Sri Lanka. India are certainly the favourites as they have gained support from the Sri Lankan fans as well after last match incident. Hope that the final is a good fight between bat and ball and not words. 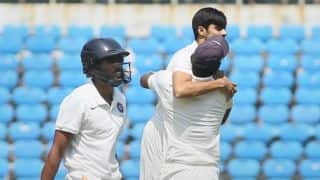